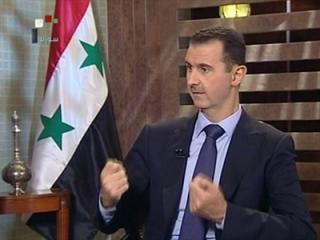 President Assad has labeled the US-led coalition against ISIS as unserious because they have been ineffective. He said “IS was created in Iraq in 2006 under the supervision of the Americans.” Assad acknowledged that he called on Hezbollah to help his forces fight against the different rebel groups in Syria but refuted claims that there are Iranian troops on the ground.

The Syrian president was speaking to French television, France 2, when he said that IS emerged from neighboring Iraq before coming to Syria “because chaos is contagious.” President Assad said the US-led coalition of 60 states “are not serious” because their number does not reflect the results achieved pointing out that it took the coalition “four months to free what their media calls the town of Kobane on the Turkish border.” He questioned the efficacy of the coalition saying that “they are not helping anyone in the region.” Assad compared the coalition to Syria claiming that that his forces “sometimes strike ten times more than the coalition in one day.”

The role of the West in the region and their support for jihadists considered as moderate was also dwelled on by Assad. “Is it democratic to send weapons to terrorists and to support them? So I have the right to support the terrorists who attacked Charlie Hebdo for example?”

Focusing on the fight between pro-government troops and rebels in Syria, President Assad denied links to the alleged chemical attacks in northwestern Idlib province last month saying “we haven’t used chlorine gas and we don’t need to.” However, he admitted that Hezbollah was “invited” by Damascus to fight “but not the Iranians” adding that “there are no Iranian troops in Syria and they have not sent any force.”