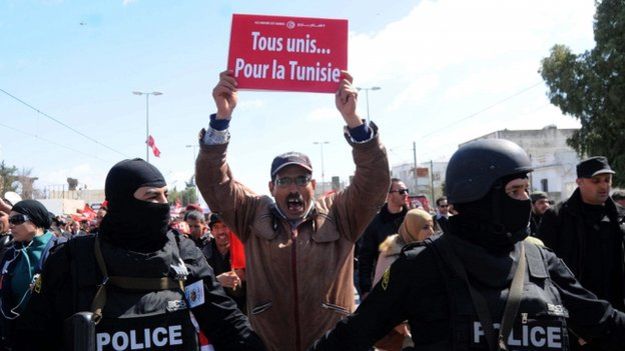 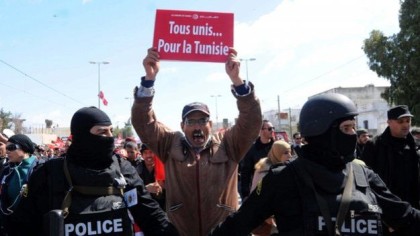 President Beji Caid Essebsi, accompanied by world leaders and amongst them president Hollande of France and Prime Minster Matteo Renzi led Tunisians in a march against terrorism as they also paid respect to the 22people killed during the attack on the Bardo museum on march 18. After the march, Essebsi said the “the Tunisian people have proven that they will not give in to terrorism.” Major political parties and former government officials also participated in the march past with thousands of Tunisians.

President Hollande stated that he is in Tunis to show his solidarity to Tunisians like they did when France suffered the Charlie Hebdo attack on January 11. He said “the march is for Tunisia and for the values the country embodies in the Arab world and beyond.”

Former Tunisian foreign minister Rafik Abdessalem was also present at the march and said that Tunisians are united against terrorism. He warned that it is a “danger that’s threatening our society and our stability” as well as that of the neighboring countries.

Those accused of being behind the attack on the museum are reported to have been killed on Saturday in the southwest region of Sidi Aich, close to the Algerian border. Prime Minister Essid said “the Gafsa operation was crowned with great success. It is a delicate operation implemented for the first time since the start of the fight against terrorism.” The operation led to the killing of Chaieb, an Algerian, accused of masterminding the attack and his group, the Okba Ibn Nafaa Brigade, of organizing it although the Islamic State claimed responsibility.

After the museum attack, several senior security officials were sacked for failing to prevent it. A stone tablet was dedicated to the memory of the victims at the museum.