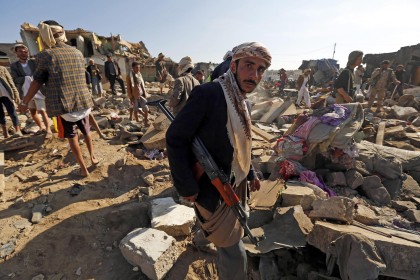 As Saudi Arabia and its Arab allies joined forces to stop the Iran-backed Houthi Shiite insurgents from tightening their grip on the impoverished country, many analysts say this joint Arab move to defend the legitimate Yemeni government may lead to the creation of an Arab army, a dream which has so far been an elusive goal to Arab countries for many years.

May be time has finally come to turn this dream into reality. The idea of setting up a joint Arab force to take up the challenges facing the Arab world, in the aftermath of the Arab Spring, has started gaining momentum and getting growing attention by Arab leaders ahead of the Sharm el-Sheikh the summit.

Arab countries have signed a joint defence pact many years ago, but stopped short of creating a permanent force to defend the sovereignty of member countries of the Arab League, despite some rare joint military actions against Israel that tested Arab unity and ended in frustration.

Arab foreign ministers, gathering in Egypt ahead of the summit, which begins Saturday, have already agreed on a broad plan for the joint Arab force. Iran’s allies in the region like Syria and Iraq look reluctant to approve such a plan and oppose military intervention in Yemen.

According to some experts, it seems that the Saudi-led Arab military campaign against the Houthis will go as planned and gain stream as it is supported by the United States and the West in a bid to secure the world oil supplies.

The airstrikes in Yemen will be followed by a ground intervention to push back the Houthis and their allies and force them to sit at the negotiations table. Following the takeover of the government by the Houthi rebels, Yemen has become increasingly unstable with the negative spill-over effects on neighboring countries.

The Arab intervention comes timely to prevent Yemen from sliding into civil war and chaos threatening the stability of the whole region.

The outcome of the current joint Arab military action in Yemen will definitely determine any future plans for the Arab army project which only needs political will to become a reality! So let’s wait and see what happens.