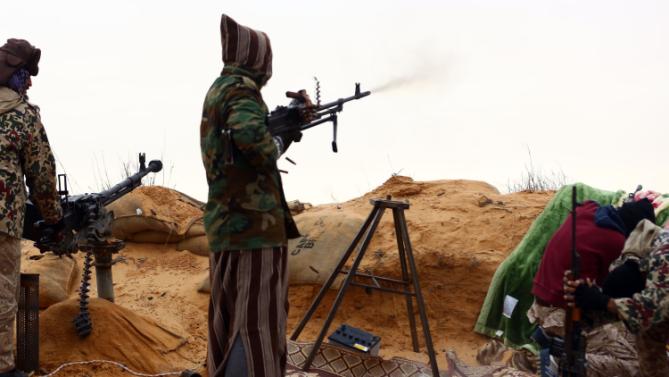 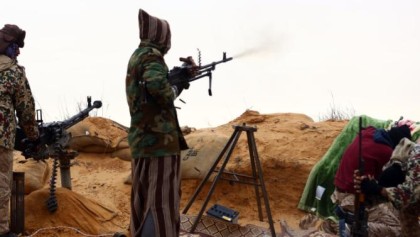 libya-extremists-fighters Armed groups loyal to the Tripoli government have clashed with fighters that had pledged allegiance to the Islamic State in the first known confrontation between the two groups.

A statement by the Tripoli-based chief of staff confirmed that the fighting took place in Sirte and claimed that they killed 17 fighters and seized 13 vehicles while they lost two soldiers and had seven wounded. Before the clash, Tripoli sent troops to Sirte where the IS-linked fighters are based but the troops remained mainly on the suburbs of the city and avoided a major confrontation.

The IS-linked group has also claimed responsibility for an attack on a checkpoint in western Tripoli, next to a Janzour security directorate building, that wounded five policemen. The activities of the weekend could mark the beginning of confrontations between the two groups. The governments in Tripoli and Tobruk both say the extremist fighters based in Sirte are Gadhafi loyalists.

Relatedly, Human Rights Watch (HRW) announced it has evidence that banned cluster bombs are being used in the Libyan war but the NGO didn’t make mention of the stolen chemical weapons.

HRW is worried about the use of cluster bombs at least during the past four months in Sirte and Bin Jawad. It said that based on the evidence it has, it is impossible to determine the side using the bombs. The Tobruk based government has acknowledged that it has carried out airstrikes in the two areas but did not use cluster bombs. HRW said evidences show the use of RBK-250 PTAB 2.5M cluster bombs.

North Africa Post's news desk is composed of journalists and editors, who are constantly working to provide new and accurate stories to NAP readers.
NEWER POSTTunisia gets missiles from Algeria
OLDER POSTMultidimensional partnership, a necessity for Africa’s development, King