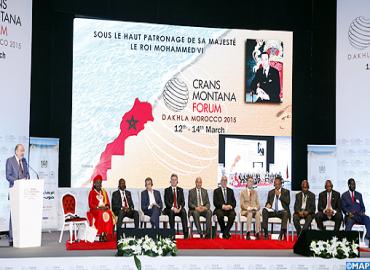 Morocco’s King Mohammed VI has underlined the strategic importance for Africa to promote a multidimensional partnership to ensure its development, the need to push forward regional economic integration and the necessity to develop common areas for shared prosperity that allow for the free movement of goods and people.

Africa needs “a multidimensional partnership model involving several actors… in order to achieve greater development,” said Mohammed VI in a message addressed to the Crans Montana Forum which held its 25th edition in Dakhla, the capital of Morocco’s southernmost province, under the theme “South-South cooperation and the development of Africa.”

The king who recalled that Morocco has made of South-South cooperation one of the pillars of its foreign policy, said his country has also “adopted a proactive policy to develop fruitful partnerships with its European, North American and Asian partners.”

“This is precisely the multidimensional partnership model involving several actors that we need to pursue resolutely in order to achieve greater development in Africa,” he insisted, pointing out that the conference theme is both topical and highly pertinent and “reflects a shared ambition to place Africa at the heart of major global geopolitical concerns.”

For the Moroccan King, the underlying concepts of South-South cooperation should integrate new 21st century perspectives, given the significant impacts of globalization as a multi-faceted phenomenon.

Renewing his country’s call for “efficient, solidarity-based cooperation that makes the most of the opportunities offered by triangular cooperation, at regional level as well as with the countries of the North,” King Mohammed VI urged Africans to be innovative to turn African States, which continue to suffer from tensions and conflicts, fallouts of colonization, “into open spaces where fruitful exchange and interaction can flourish between African societies.”

He insistently urged African States to overcome the consequences of the fragmentation Africa was subjected to during the colonial era, and which led to political and ethnic strife, and to turn the continent’s tremendous human and natural resources into “a powerful catalyst for regional integration and complementarity.”

“Africa needs to push forward regional economic integration and develop common areas for shared prosperity that allow for the free movement of goods and people,” said the Moroccan king who called African States to be more self-confident and to believe in their own capabilities, to develop and support win-win partnerships, and to bolster their share in the global wealth creation chain.

In his message, King Mohammed VI also Touched on the worrying security challenges thrown at the continent. He said in this respect that the alarming new transnational perils – including terrorism, organized crime, trafficking in drugs and human beings as well as religious extremism – which are on the rise in many parts of Africa “call for transnational responses” and require “a collective and concerted reflection.”

To explain the venue of the Forum in the Moroccan city of Dakhla, the Swiss NGO devoted to conflict resolution, said in a statement that “Even though remote, Dakhla enjoys an exceptional strategic position, and offers an extraordinary model of economic and social development, being the hub of an entire, major region of Africa.”

The forum is held in partnership with the Islamic Educational, Scientific, and Cultural Organization (ISESCO).

North Africa Post's news desk is composed of journalists and editors, who are constantly working to provide new and accurate stories to NAP readers.
NEWER POSTLibya: Clashes between I.S fighters and Tripoli Government Troops in Sirte
OLDER POSTControversial Crans Montana Forum Turns Out to be Big Hit for Morocco