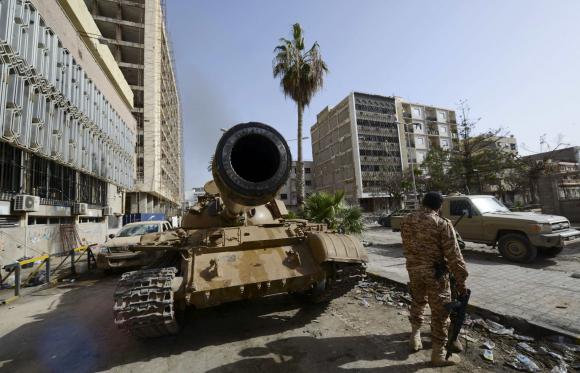 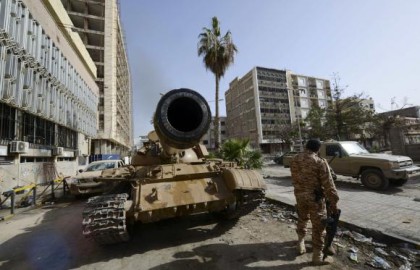 The branch of the Libyan central bank located in Benghazi near the sea port has been taken over by armed men claiming to be from the youth of the naval base in a video posted online. Around $100 billion is believed to be in the bank when the attacked happened. The international community and the U.N have condemned it while the Tripoli based government has decided to suspend the talks in Geneva.

Libya’s central bank has tried to be neutral in the war and Chairman Sadik el-Kabir of the bank was quoted by The Times saying that they have provided funds for “thousands of fighters on all sides of the struggle” for power. The rival governments in Tobruk and Tripoli control certain areas and fighting has continued despite a ceasefire being announced last week.

Farhan Haq, a UN spokesperson, condemned the attack and stressed the importance of “moving ahead urgently with the dialogue process” to end the war in the country. He urged both parties to respect the ceasefire and withdraw from cities as negotiations continue in Geneva.

Surprisingly, the spokesman of the parliament in Tripoli announced that they will no longer participate in the U.N sponsored talks after the central bank attack in Benghazi. He claimed that Tobruk’s forces were behind the attack and they have also violated the ceasefire as troops led by renegade General Haftar continue to attack their positions.

Mohamed Bazaza, a spokesman for Thinni, said comments from Tripoli are “media propaganda war.” Colonel Farraj al-Barasi, an army commander running a military sector in eastern Benghazi, said the army has been controlling the bank for some time and claimed that only technical equipment have been moved while “the cash is still in the safes.”