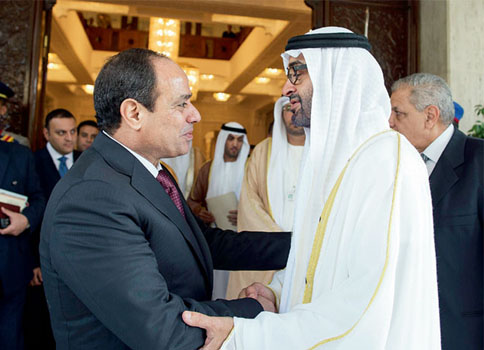 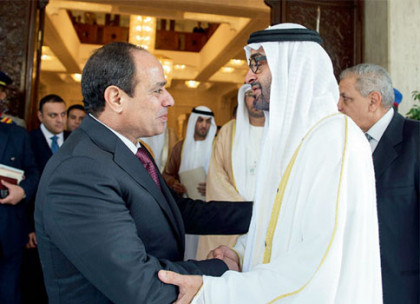 President Sisi is on his first official visit to the United Arab Emirates (UAE) as a Head of State and was full of praise of its leaders as he paid homage to the founder late Sheikh Zayed bin Sultan Al Nahyan. He described the ties between the two states as “strong and balanced.” He urged the investors in the Emirates to venture into Egypt because the new investment law will facilitate the procedures for them. The UAE has been very supportive of the Egyptian administration after the ousting of Mohammed Morsi in a coup d’état led by Sisi.

The protests in Egypt that led to the departure of President Mubarak paralyzed the Egyptian economy. The situation continued when Morsi was elected which led to frustrations against his regime. When he was toppled, Gulf countries helped to ease the difficulties and the UAE has given more than $6billion in cash and interest-free loans to guarantee fuel supplies and it funds projects in health care, education, food, housing and transport.

These projects have also helped to calm the crisis in the North African country which has 30% of its population between the age of 18 and 40. Terrorism has been an issue in Egypt especially in the Sinai Peninsula and engaging the youth in fruitful ventures could help to curb their numbers. Sisi said Egypt and the UAE share similar opinions on terrorism.

In a meeting with investors in Abu Dhabi, Sisi gave them assurances that they will provide the appropriate investment atmosphere that will enable them benefit from the “genuine investment opportunities” Egypt has to offer. He urged Egyptian, Arab and foreign investors to help in upgrading the Egyptian economy.