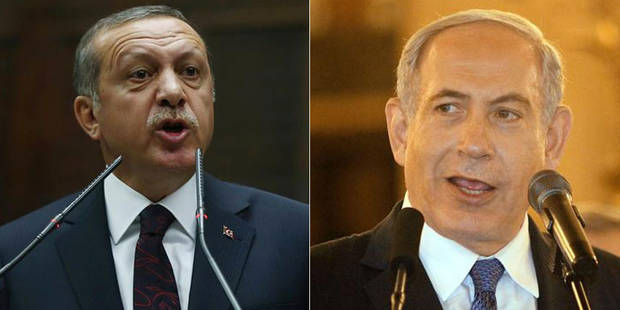 President Erdogan has questioned Prime Minister Netanyahu’s morals after he attended the solidarity march in Paris. He alleged that Netanyahu should first account for his killings in Palestine. He also accused the West of hypocrisy and Islamophobia. There are reports that Netanyahu forced his way through to the list of invitees before being snubbed by President Hollande at a ceremony held in Paris’s main synagogue in memory of the four Jews that lost their lives in the attack.

Erdogan known for his outspokenness asked how can a man that has carried out “state terrorism” dare attend a march against terrorism without giving an account for the children and the women that he has killed. He was referring to the presence of Netanyahu alongside several Head of states in Paris on Sunday to march against the attacks in the French capital that led to the death of 17 people.

Reports have stated that the French government asked Netanyahu not to attend the march but he nevertheless decided to come when he learnt that Foreign Minister Lieberman and Economy Minister Naftali Bennett will be there. His unexpected arrival led to the invitation of Palestinian President Mahmoud Abbas who was also asked earlier on stay away from the event. Erdogan was not there but was represented by his Prime Minister Ahmet Davutoglu.

President Abbas was in Turkey beside Erdogan when he made remarks targeting Netanyahu. It is believed that one of the reasons why France was unwilling to invite the Israeli and Palestinian leaders was because of fears that they could turn the solidarity march into an Israeli-Palestinian tussle especially at a period when Palestine has decided to join the International Criminal Court ahead of Israeli elections in March.