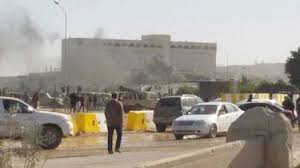 The Libyan parliament in Tobruk has come under attack after a suicide bomber in a car detonated his bomb at the entrance of the al-Salam Hotel where the parliamentarians are based and have their sessions. There are no casualties. This is the first time the parliament is targeted in a bomb attack since it left Tripoli. No group has claimed responsibility.

The attack occurred when the parliamentarians were in a hall in the hotel. Security has been boosted around the area. Previous attacks in the town have been blamed on Islamic extremists based in the eastern town of Darna, who have pledged allegiance to the Islamic State.

Egypt has condemned the attack with a statement from the Interior Ministry. Tobruk is an eastern coastal town not far from the Egyptian border.

Libya has been unstable since the end of the Gadhafi regime. Authorities that succeeded him have had their decisions challenged by armed militias who have refused to disarm since the end of the war. The country is now being ruled by two governments, each with its own parliament. Fighting between the groups loyal to these governments has increased in the past days especially over the control of oil terminals.

Earlier this month, Prime Minister Al Thinni of the Tobruk government said they were working on a system that will help them stop the payment of oil revenues to accounts beyond their control.

The Tobruk government has also enlarged its military operations to Misrata where its fighter jets launched airstrikes. The government forces are collaborating with those loyal to renegade General Khalifa Haftar to fight against the Islamists in the country.

The war in Libya has destroyed the country’s infrastructure and forced many people to flee while tens of thousands have already been killed.