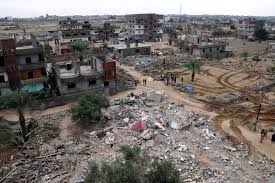 Egyptian efforts to create a 10 kilometer long buffer zone along its border with a kilometer radius are still being pursued. The killing of 30 Egyptian soldiers by a suicide bomber in the Sinai region in October has forced the government to construct a buffer zone and declare a three-month emergency in certain areas of Northern Sinai.

Attacks on Egyptian forces in the Sinai have increased since the ousting of Mohamed Morsi. Militants in the Sinai region have stated that the attacks are meant to revenge the more than thousand people killed during protests against the removal of Morsi. The Egyptian government thinks that Palestinian militants linked to Hamas are helping to plan attacks against its forces.

Egypt said on Tuesday that work will begin next week to double the width of the buffer zone being built along the border with the Gaza Strip to prevent militants infiltrating from the Palestinian enclave. Around 800 homes have already been demolished to set up a 500 meter wide buffer zone and demolitions will begin again in the first week of next year to add another 500metres to it.

Governor Abdel Fattah Harhur of the North Sinai province has told affected families to contact authorities on whether they will opt for financial compensation or alternative housing.

The setting up of the buffer zone will affect Gaza because most of the tunnels that are used to smuggle goods and bypass the Israeli blockade on the area. Egypt has already announced that it has destroyed more than 1600 tunnels since the end of the Morsi regime.

Egyptian forces discovered 19 recently-built tunnels on Monday and one of the tunnels which ended in a house measured around 1,7 kilometers from the border.

North Africa Post's news desk is composed of journalists and editors, who are constantly working to provide new and accurate stories to NAP readers.
NEWER POSTLibya: Tobruk parliament attacked in a car explosion
OLDER POSTPalestine: Amended draft will be submitted before 2015