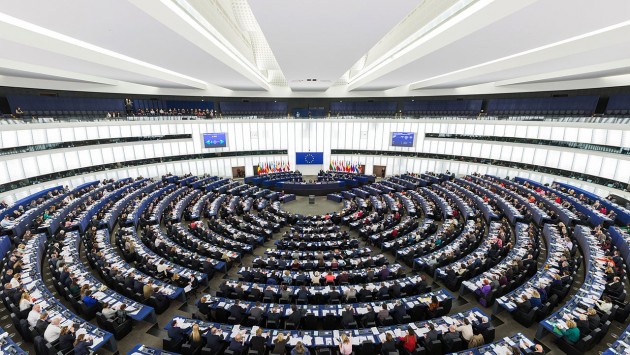 After Palestine was recognized by Sweden as a State and after several European parliaments urged their respective countries, mainly Great Britain, France, Spain, and Ireland, to recognize its right to statehood, the European Parliament adopted on Wednesday a resolution supporting the recognition of Palestinian statehood and the two state solution.

The resolution states that the European Parliament “believes these should go hand in hand with the development of peace talks, which should be advanced.”

The Parliament reiterates “its strong support for the two-state solution on the basis of the 1967 borders, with Jerusalem as the capital of both states, with the secure State of Israel and an independent, democratic, contiguous and viable Palestinian State living side by side in peace and security on the basis of the right of self-determination and full respect of international law,” says the resolution.

The MEPs stress in the resolution “the importance of consolidating the authority of the Palestinian consensus government” and “urge all Palestinian factions, including Hamas, to end internal divisions.”

The resolution, reiterating that Israeli settlements are illegal under international law, also calls on the EU to become a genuine facilitator in the Middle East peace process and asks the EU’s foreign policy High Representative to facilitate a common EU position to this end.

In a bid to support EU diplomatic efforts and help advance an agenda for peace in the Middle East, the EP also decided to launch a “Parliamentarians for Peace” initiative to bring together MEPs and MPs from the Israeli and Palestinian parliaments.

The resolution, initiated by the Group of the Progressive Alliance of Socialists and Democrats, was backed by the main political groups both from right and left, from the Christian Democrats to the neo-communists. It was passed by 498 votes to 88, with 111 abstentions.

The EP’s resolution was adopted while the Palestinians are about to seek international recognition of statehood through a new resolution to the UN Security Council although they know that the U.S.A. will stand in their way.

The Palestinian text will call for Israeli troops’ withdrawal from the occupied Palestinian territories within two years and for the resumption of negotiations.

North Africa Post's news desk is composed of journalists and editors, who are constantly working to provide new and accurate stories to NAP readers.
NEWER POSTMorocco, a strategic partner in anti-terror cooperation with Sahel-Sahara Countries, EU
OLDER POSTEgypt Air to be restructured after almost $1bn loss