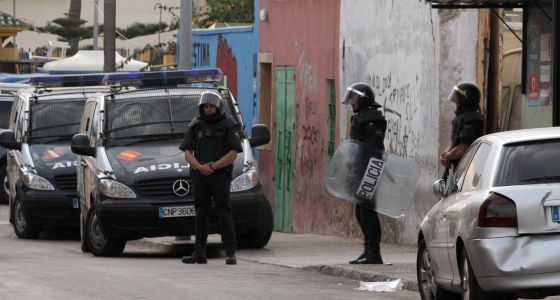 Morocco, Spain Nab Recruiters of Women for the Islamic State

Moroccan and Spanish security authorities have captured seven terrorists, members of a network that recruits women and sends them the Islamic State (IS) in Syria and Iraq.

Four people were arrested in the Spanish enclaves of Ceuta and Melilla while the 5th suspect was picked in Barcelona. The Moroccan police caught two others in Fnideq. The suspects, who operate in this area, bring women from Spain and indoctrinated with extremists thoughts. The two Spanish enclaves are also very attractive to both Islamists and to illegal sub-Saharan migrants.
Intelligence agencies have picked an increase in the recruitment of women from Europe for the Islamic State group in the past year, with at least 200 coming from Spain and France.
The women are used as suicide bombers or married off to foreign and Islamist fighters.
This joint anti-terror operation made by Moroccan and Spanish authorities comes as the North African country hosts the first meeting of the working group of the Global Counterterrorism Forum (GCTF) on foreign terrorist fighters.
Chaired by Morocco and the Netherlands, the working group brings together senior officials and experts from 40 countries and several international, regional and sub-regional organizations.
The meeting reviewed ways to enhance international cooperation ties to face the security threat posed worldwide by the foreign fighters.
Launched in 2011, GCTF provides a venue for counterterrorism (CT) officials to meet with their counterparts from different regions of the world to share CT experiences and expertise and to exchange views on strategies and capacity-building programs against terrorism and extremism.