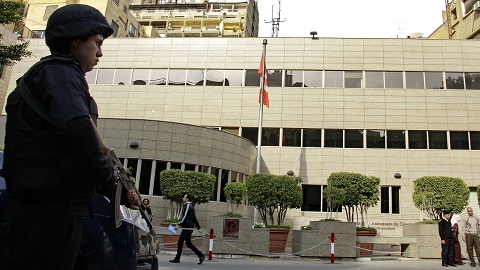 Canada has announced that its embassy will be limiting its services in the country due to security concerns. There are fears that many other western embassies could also take a similar step as insecurity continues to be a major concern especially with the rising insurgent attacks linked to the Islamists. The British embassy has already closed its services.

A message on the Canadian Embassy website in Cairo stated that its “ability to provide consular services” could be “limited for short periods due to unsettled security conditions.” Terrorist threats began to terrify Canada after an armed man attack the Ottawa parliament and a Canadian man called for attacks against his native country and soldiers. The North American country could have become a target for the Islamists after it joined the U.S.-led military campaign against Islamic State militants in Iraq and Syria.

Insurgent attacks in the Sinai have often targeted Egyptian security personnel but reports have claimed that an extremist suspect under the custody of the Egyptians has warned that foreign embassies are also under their radar. The British embassy which closed earlier on didn’t mention the reason behind its decision.

The western countries started to get concerned when the most dangerous extremist organization in Egypt killed a U.S. oil engineer a few months ago. Cairo is trying to combat the extremist groups in the Sinai by increasing its military presence and operation in the Sinai. Reports have stated that the explosion of bombs in the Nile Delta and the national capital have become frequent.

Australia has warned its citizens not to travel to the governorate of North Sinai and to avoid tourist destinations as well as government buildings due to political tension and terrorist threats in the country.

North Africa Post's news desk is composed of journalists and editors, who are constantly working to provide new and accurate stories to NAP readers.
NEWER POSTEgypt: BP to increase production by 100% with $12bn investment
OLDER POSTTunisia: Presidential final round slated for 21 December