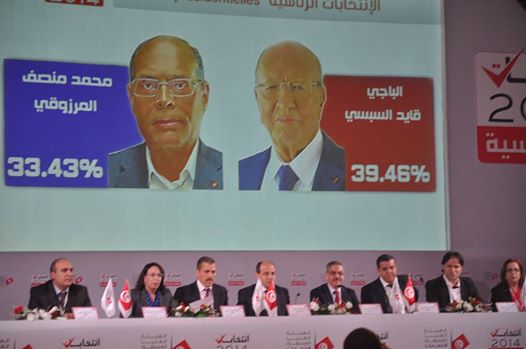 21 December has been chosen by the electoral body as the date that will assemble Tunisians at voting stations to elect their new president in the last round of the presidential elections. The last two presidential candidates, Moncef Marzouki and Beji Caid Essebsi, will begin their official campaign on Tuesday 9 December. The ISIE is urging them and their supporters to keep the peace before, during and after the elections. Neither Marzouki nor Essebsi was able was able to have more than 50% of the votes during the first round as both of them claimed 33.43% and 39.46% respectively.

88 year old Essebsi is backed by the Nida Tounes party. He has the profile of a veteran politician after serving under President Habib Bourguiba, the father of Tunisia’s independence, and Ben Ali in key government posts. His critics claim that electing him as president will mean a return to autocratic rule that they stood against to end Ben Ali’s regime. Nida Tounes won the majority of the seats in the parliamentary elections.

Marzouki is affiliated to the Ennahda party although the latter didn’t endorse a candidate for the presidential elections. Most of the party’s supporters are believed to have rallied behind him in the build-up to the elections. Marzouki, 69, was an exiled dissident during Ben Ali’s rule and was elected president at the end of 2011 by an interim assembly under a coalition deal with the then-ruling Ennahda. Electing him is termed by his opponents to signify Islamism in Tunisia.

The challenges that lie ahead of the next government will be the revival of the economy, curbing the social unrest as well as dealing with the jihadist threat that the North African countries are facing.