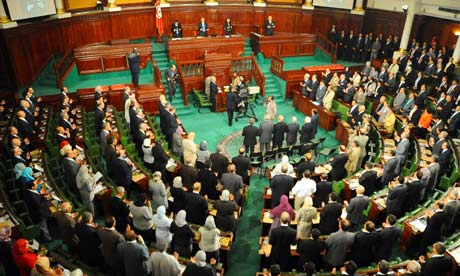 Ahead of the Presidential elections later on this month, attention in Tunisia has shifted to the parliament’s first session. The newly elected 217 members of the parliament were present to honor the inaugural session which was also marked by a speech by the president of the outgoing interim assembly, Mustapha Ben Jaffar. The parliamentary elections were held in November.

Jaffar highlighted that the task that lies ahead is enormous. He said that although Tunisia has been able to overcome the theoretical aspect of the transition by approving a constitution that has been hailed as one of the most progressive of its kind in the Arab world, the time has come for it to be applied. He described the application of a constitution as the toughest stage for a Tunisia that is henceforth considered as a model for transition in the region after the Arab Spring. He told the parliamentarians that they are now faced with a new test on the road to democracy.

The major items on the agenda are forming a new government, naming a Prime Minister and electing a president for the new parliament. The formation of a new government could probably be delayed until after the presidential elections between incumbent Moncef Marzouki and veteran politician Beji Caid Essebsi, leader of Nida Tounes. There are claims that Nidaa Tounes wants to create a coalition with the smaller parties in the parliament and name a prime minister.