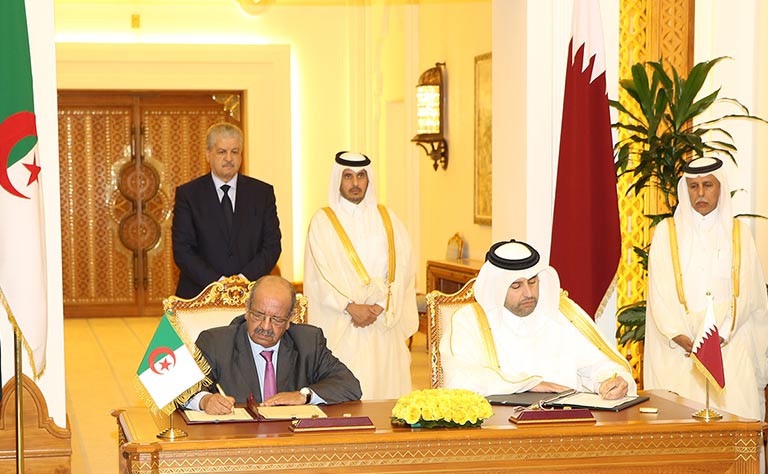 Algerian Prime Minister Abdelmalek Sellal arrived in Qatar on Sunday for a two-day working visit. The highlights of his visit include the inauguration of the Algerian Embassy and the signing of several agrrements at the fifth Qatari-Algeria higher committee meeting.

The inauguration of the new Algerian Embassy building will contribute immensely in bridging the ties between the two countries described by the Qatari foreign Minister Khaled Al-Attiyah as “strong, dynamic and progressing” during the ceremony.

A meeting held between the Qatari-Algerian supreme joint committee also dwelled on ways of ending the difficult circumstances that the Middle East and North Africa region is experiencing. The meeting was co-chaired by the Prime Ministers Sellal and his Qatari counterpart.

The end of the fifth Qatari-Algeria higher committee meeting was marked by the signing of a couple of cooperation agreements and Memorandums of Understanding. They range from cooperation between the two state news agencies, in youth and sports programs, fisheries, media, culture and education. The MoUs included the field of water resources, consumer protection, economic control, combating commercial fraud and a bilateral agreement on mutual administrative assistance for the optimum application of customs law to suppress, investigate and combat customs violations. A twin-ship protocol between their national libraries was also signed. The meeting was co-chaired by the Prime Ministers of the two countries and Minister of Interior Sheikh Abdullah bin Nasser bin Khalifa Al-Thani.