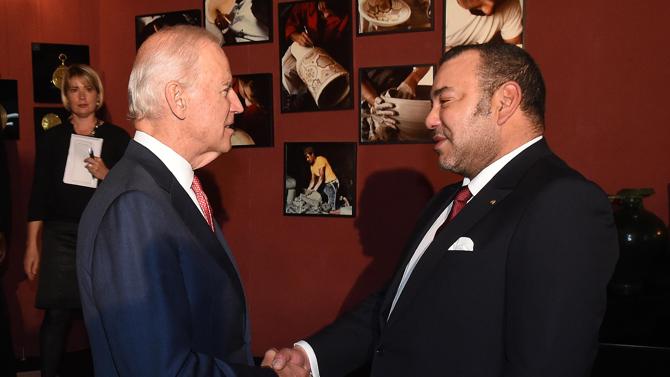 Morocco and the United States agree on the importance of the non-military aspects of the struggle against violent extremism and on social and political inclusion and economic opportunity as a compelling alternative to extremism.

This was stated at a meeting held on Wednesday in Fez between King Mohammed VI and U.S. Vice-President Joe Biden who is visiting Morocco to take part in the 5th Global Entrepreneurship Summit held in Marrakesh this November 19-21.

King Mohammed VI and Vice-President Biden discussed at their meeting their countries’ joint efforts part of the international coalition against ISIL and “agreed on the importance of the non-military aspects of the struggle against violent extremism, including exposing and discrediting violent extremist recruitment and providing a compelling alternative through social and political inclusion and economic opportunity,” says the White House in a press release.

Although Morocco is not participating in the military operations spearheaded by the United States against the Islamic State group in Iraq and Syria, it is actively struggling against the jihadist phenomenon as more than 2,000 Moroccans –including bi-nationals—have reportedly been recruited by jihadist groups and sent to fight in Iraq and Syria.

The North African country has dismantled several “terrorist cells” in recent months and has also helped foil terrorist plots in some European and African States.

Washington deems Morocco as one of its closest counterterrorism partners in the Middle East and North Africa region and one of the most active members of the Global Counterterrorism Forum (GCTF.) Washington also hails the North African country’s comprehensive counterterrorism strategy, which reflects technical expertise as well as leadership in the religious and cultural dimensions of countering violent extremism.

The King and the Vice-President discussed a wide range of global, regional, and bilateral issues on which Morocco and the United States are partners, including efforts to advance the shared priority of achieving a secure, stable, and prosperous Maghreb, Africa, and Middle East.

They agreed on the need for the international community to help Libyans unite behind a peaceful path forward.

The King and the Vice President also discussed Morocco’s important role as a gateway for trade and investment in sub-Saharan Africa.

The Vice President thanked King Mohammed VI for hosting the 5th Global Entrepreneurship Summit in Marrakech, and both agreed on the importance of promoting economic opportunity, especially for women and young people. They also discussed how best to support Morocco’s success, and reaffirmed their dedication to work together to promote human and economic development, including through vocational training and educational exchange.

Regarding the Western Sahara, the Vice President reaffirmed the text of the Joint Statement between the United States and Morocco released at the end of the King’s meeting with President Barack Obama in Washington in November 2013.

The United States has repeatedly made it clear that Morocco’s autonomy plan is serious, realistic, and credible, and that it represents a potential approach that could satisfy the aspirations of the people in the Sahara to run their own affairs in peace and dignity. Washington has also reaffirmed on many occasions commitment to a peaceful, sustainable, mutually agreed-upon solution to the Sahara question.