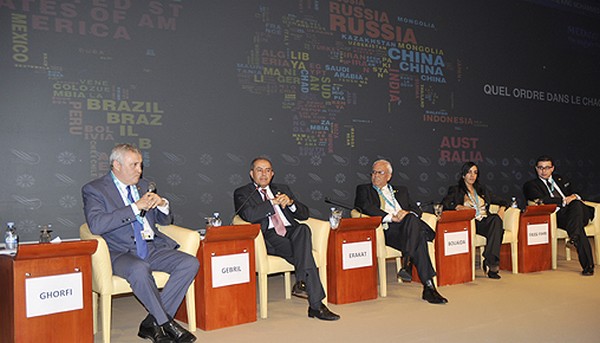 A Forum held last week in the Moroccan northern city of Tangiers called all stakeholders in the Libyan crisis to hold an emergency meeting in Makkah, under the aegis of the Saudi King, to launch an inclusive national reconciliation process, as was done with Lebanon in 1989.

Saudi Arabia had then hosted a Lebanese reconciliation meeting that adopted the Taif Declaration ending the civil war that tore the country for almost 15 years.

The Tangiers Declaration adopted Saturday at the end of the four-day forum urged all the Libyan sides rejecting terrorism to agree on a common political project.

The declaration also urged the international community to consider a solution to the Libyan crisis in its natural regional framework, namely its Maghreb and Sahel areas, and called the Community of Sahel-Saharan States –a regional economic community known as Cen-Sad- and the Maghreb Union –mustering Algeria, Libya, Mauritania, Morocco and Tunisia- to be more involved in seeking a lasting solution to the Libyan crisis. Solitary initiatives and exclusion attempts are counterproductive and can even be dangerous in the future for all of the Sahel-Saharan region, the document outlined.

The Forum renewed the need to set up a consultation and information mechanism in the Sahel as well as an early warning tool to effectively fight porous borders-related threats and all forms of trafficking (drugs, weapons and human beings.)

This approach should evolve into a periodical and sectoral consultation 5 + 5 Dialogue (Maghreb + Sahel), like the 5+5 Western Mediterranean dialogue.

The Forum on the other hand encouraged the United Nations and the UN Secretary General’s Special Representative, Bernardino Leon Gross, to continue their efforts to bring the conflicting parties around the negotiations table to reach a sustainable and lasting solution.

Former Libyan Prime Minister Mahmoud Jibril had appealed in an address before the Forum Saudi Arabia and the countries of the Gulf Cooperation Council to sponsor a reconciliation meeting for the Libyans.

Mahmoud Jibril, leader of the National Forces Alliance (NFA, secular) proposed “a pact of Makkah.” “Otherwise, he warned, Libya will continue to fall in the abyss.” Egypt, Tunisia, Algeria and the countries of the southern Mediterranean cannot be stable without a stable Libya, he insisted.

Just few hours before he made his address, the Libyan Supreme Court annulled the results of last June parliamentary elections that were won by his AFN party.

The decision was welcomed by the Justice and Construction Party (PJC), close to the Muslim Brotherhood, and demonstrations of joy were staged in Misrata, their stronghold.

Libya has plunged in chaos and violence since 2011 when the Libyan leader was toppled and later on killed. Several militias seized his arsenal and started fighting for control over the country. Libya also serves as a supply warehouse for armed groups in Egypt, Tunisia, Algeria and Mali as well as to the other terrorist groups roaming along its 4,000 km-long land borders with the Sahara and the Sahel.