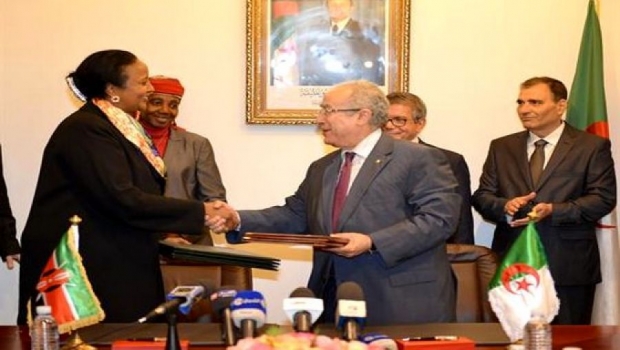 Kenya’s Cabinet Secretary Amina Mohamed is on a two day working visit to Algeria where she met with Prime Minster Abdelmalek Sellal and other senior government officials. Among the highlights of her visit is the signing of an agreement with Foreign Minister Ramtane Lamamra to set up a joint commission for cooperation and memorandum of understanding on political consultations as well as the opening of an Embassy in Algiers. The two countries have also shown interest to collaborate in Tourism, trade and energy sectors.

Algeria’s Foreign Minister Ramtane Lamamra stated that they share a common history with Kenya because they both “fought bloody wars for independence.” Noting that they are now faced with “terrorism and general insecurity,” he cited that the agreement will ease their common fight against it. Prime Minister Abdelmalek Sellal also called for the sharing of information in order to avoid deadly terrorist attacks.

Cabinet Secretary Mohammed remarked that they “have cooperated well in the African Union and in the United Nations.” She said the two countries “need to now move to the next level and bring our people even closer through trade, tourism and cultural exchanges.” Mohammed thinks that Kenya can supply Algeria with tea and coffee instead of importing it from Asia and Columbia respectively.

Algeria wants to develop its tourism products for the first time and hopes to learn from Kenya which already has an established tourism industry.

As part of the technical bilateral agreements between the two countries, Algeria will train Kenyans on oil and gas production while Kenya will offer Geothermal and renewable power training accordingly.

President Uhuru Kenya will be visiting Algeria early next year at the invitation of his counterpart President Abdulaziz Bouteflika.