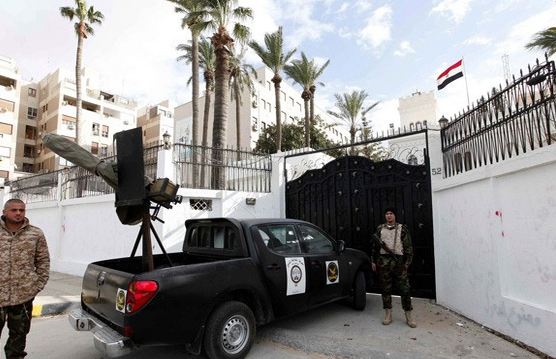 A car bomb exploded near the Egyptian embassy in Tripoli on Thursday, causing some damage to the diplomatic building but no injuries or casualties.

A bomb was discovered near the embassy of the United Arab Emirates. It failed to explode, according to the Libyan security officials.

Most diplomatic missions, foreign and international organisations have been closed in Tripoli after Islamist armed groups took control of the city.

Three years after the collapse Gadhafi regime, Libya is caught up in growing unrest as rival armed factions compete for power and control of the country’s oil resources.

Egypt and the UAE are accused by some Libyan armed groups, opposed to the central government, of supporting former Libyan army general, Khalifa Haftar, who is leading a campaign against extremists armed factions.

Western powers are concerned that the North African country is heading towards more turmoil as authorities are too weak to control former rebels who helped oust Muammar Gadhafi in 2011 and defy now state authority.

According to the UN officials, factional warfare in Libya is dangerously pushing the country “very close to the point of no return” and is threatening the stability of neighbouring countries.

To help the Libyan government forces face Islamists armed groups, the UK, the US, Italy and Turkey had promised to train a 15,000-strong Libyan force. The plan was touted as one of the major achievements of the G8 summit hosted by the UK at Lough Erne in Northern Ireland in 2013.

However, this program is facing big hurdles due to the lack of money for the training and fighting in Libya among the trainees for ideological and political raisons.