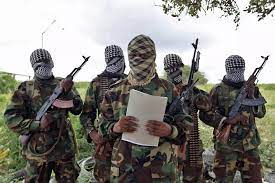 The attackers targeted a military facility in the Mahaas district of Hiran region that is at the heart of the government’s offensive against al-Shabab. The two vehicles exploded after the dawn prayer in a neighborhood full of civilians that killed at least 15 people. Local leaders and security officials said two military bases were targeted in Mahaas in retaliation for operations against al-Shabab fighters. The district in central Somalia is at the center of the ongoing government offensive against the al-Qaida-linked group of thousands of fighters that has controlled parts of central and southern Somalia for years. The government has vowed to defeat it this year. The Somali army, together with local militias, recently opened a key supply route to Mahaas after it had long been under siege.

The armed group’s media office claimed responsibility in a statement, saying fighters had detonated explosives at military bases in Mahaas and also attacked another base in a nearby Dadan. The statement added al-Shabab had targeted “apostate militias and soldiers”. The group has been under pressure since last August when President Hassan Sheikh Mohamud launched a military offensive shortly after taking office. The Somali government says it has killed, with support from the United States and African Union troops, hundreds of al-Shabab fighters and recaptured dozens of settlements, although different sides often give conflicting accounts of clashes. But, despite the offensive, al-Shabab remains entrenched in vast swaths of rural central and southern Somalia and carries out frequent attacks targeting both civilians and military objects.