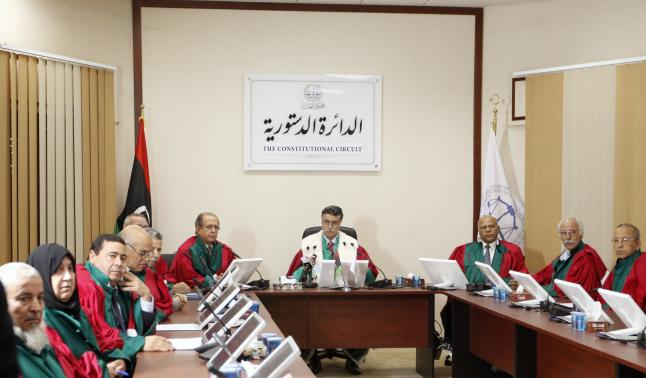 The internationally recognized Libyan government based in Tobruk is “unconstitutional.” That was the decision of the country’s Supreme Court after it ruled on the constitutionality of the June 25 vote that led to the creation of Prime Minister Abdullah al-Thinni’s government. The decision has been received with mixed feelings. The authorities in Tobruk held a meeting to discuss the ruling.

The Supreme Court decided that the buildup to the elections of the parliament which is now based in Tobruk is marred with “illegality” thereby making the Tobruk government “unconstitutional.”

An emergency meeting was held in Tobruk by the parliament and signs of contestation are already emerging. Issam al-Jehani, a Tobruk-based parliamentarian, posted on Facebook that “lawmakers will not recognize a verdict decided under the gun.” The request for the Supreme Court’s ruling was made by a Tripoli parliament member.

Experts disagree whether the decision will facilitate negotiation. However, Jason Palk, an expert on Libya, thinks that international mediators could use the court’s decision to speed up negotiations.

The United Nations has stated that it will study the ruling “closely” and discuss with “Libyan stakeholders across the political spectrum, and with international partners.” The UN is among the international organizations backing the Tobruk government. It also stated that it remains “committed to working with all parties to help Libya overcome the current political and security crisis.”

Celebrated by the supporters of the Tripoli based government, the decision will be unpopular among the loyalists of the Tobruk government with fears that it could lead to more intensive fighting.

The Supreme Court announced the dissolution of the Tobruk based parliament. Al-Thinni and his government, isolated in the far eastern city of Tobruk, have little control over Libya’s three main cities.