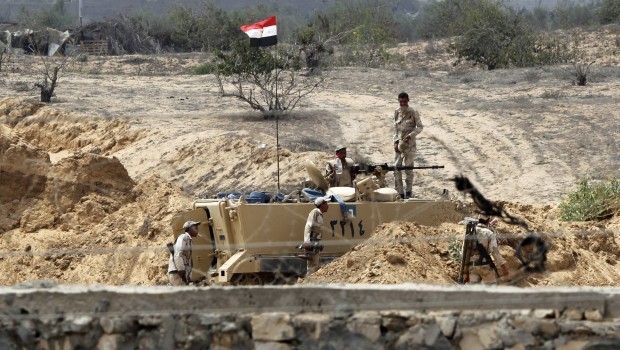 Egypt decreed a state of emergency in north and central Sinai for the next three months following the terrorist attack at El-Arish checkpoint that killed 30 soldiers and imposed a curfew from 5:00 pm to 7:00 am.The government also declared a three-day period of mourning.

After a meeting with the Supreme Council of the Armed Forces on Saturday, President Abdel Fattah al-Sissi called on Egyptians to be united in their fight against terrorism.

President Al-Sisi claimed that the terrorists received “external support” to carry out the attack but he did not cite the side supporting them or where the support came from. Egypt has been fighting Islamist militants in the Sinai Peninsula who launched several attacks on security outposts and personnel. The attack on El-Arish checkpoint has been recorded as the deadliest single attack since the coup d’état by Al-Sisi last year.

Authorities are undertaking a string of measures to overcome the insecurity in the Sinai.

In a released statement, it was highlighted that “a committee comprising senior army officials was formed to examine the latest terrorist attacks in Sinai… in order to reinforce the struggle against terrorism.” A presidential decree also stressed that “the army and police will take all necessary measures to tackle the dangers of terrorism and its financing, to preserve the security of the region… and protect the lives of citizens.”

The government is drafting a bill that will refer “matters of terrorism” in relationship with security installations or personnel, including vandalism and road blocking to military tribunals.

Ahead of the legislative measures, the military intensified their presence and operations in the Sinai Peninsula.