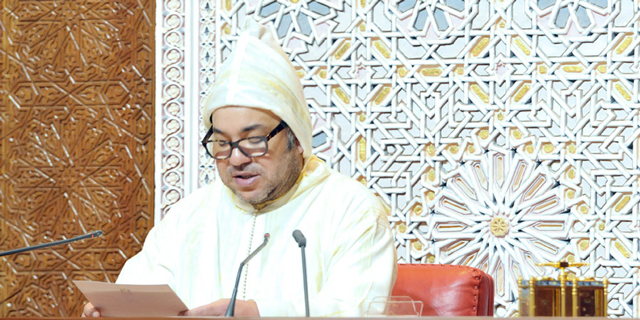 The King of Morocco has urged Members of parliament to avoid petty party politics, to pay utmost attention to citizens’ needs, to be honest with voters and to adopt a charter of ethics.

Opening the Fall session of Parliament on Friday, King Mohammed VI called all MPs and politicians to show a sense of responsibility and ethics, to raise the level of political debate and to avoid lack of respect for others.

“Political discourse requires being honest with the citizens, making objective analyses and ensuring that stakeholders show mutual respect, so they can all be partners in serving the nation, and not just politicians divided by narrow interests,” said King Mohammed VI during the official opening of the parliamentary session.

“Political practice should primarily be based on close attention to the citizens’ needs, on constant contact with the people, on compliance with laws and on observation of ethical standards,” he told the members of the two chambers of the Moroccan parliament.

The Moroccan ruler did not hesitate to criticize the behavior of some elected officials, who damage their reputation and that of their party, harm their country’s best interests and undermine political practice.

He also deplored that the political discourse is often “excessively centered on partisanship and party politics” instead of focusing on the nation’s major issues or on the citizens’ real concerns.

He called in this vein on MPs to adopt “a broad-based ethics charter, which would not be limited to articles in the rules and regulations of the two Houses of Parliament.”

The behavior of some politicians who only seek to serve their personal interests and the practices of some political parties which fail to democratize their own institutions are often blamed for the public’s lack of interest in politics and boycott of elections.

The King went on to say that “elections should not be perceived as an end in themselves, but rather as an opportunity for political contest between programs and elites,” deeming that in an electoral race there are no winners or losers. “…Even those who fail to win the confidence of most voters contribute, through their participation, to the dynamism of elected institutions” and “are expected to form a constructive opposition bloc and propose realistic alternatives that will ultimately help them return to the management of public affairs.”

The King called the members of Parliament to be well-prepared for the upcoming elections and to show a keen sense of sincere patriotism in respecting the will of voters.

He, likewise, urged the MPs “to determine national priorities in a very responsible manner, and to make the spirit of compromise prevail, particularly when adopting the regulatory texts relating to constitutional institutions and the nation’s major reforms.”

Among these texts, he mentioned the bills related to the reform of the justice system, particularly the setting up of the Higher Council of the Judiciary and the adoption of the judges’ statute. He also announced that the Constitutional Court, which will have extensive powers, will be shortly set up.

He further called for completing the setting up of participatory democracy and good governance related institutions, in accordance with the provisions of the new constitution.