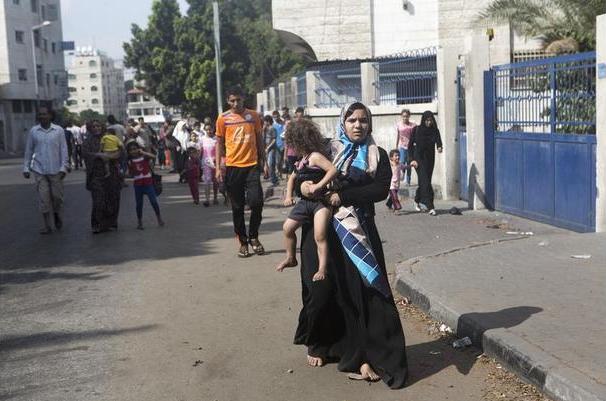 Pregnant in War, a Fact of Life for Too Many Women in the Middle East

UNITED NATIONS – Imagine giving birth in a refugee camp after you fled the brutal repression of an Islamic group or while missiles are being dropped a few meters away. You will then understand how war and forced displacement in the Middle East are taking a heavy toll on pregnant women.

This is critical because the Arab world has one of the highest fertility rates on the planet. In addition, refugee life seems never-ending. The plethora of temporary settlements is now turning into sizeable cities.

More than half a million Syrian women are pregnant

As thousands of Syrians continue to flee every day the violence in their country, pregnant women are paying the price of war.

Amid one of the biggest humanitarian crisis, more than half a million Syrian women are pregnant – 430,000 in the war-torn state and 77,000 in neighboring nations, namely Egypt, Jordan, Iraq, Lebanon and Turkey.

Although international organizations are providing reproductive health services, such as emergency obstetric care and psychological help, they lack financial support.

Earlier this month, the United Nations World Food Program (WFP) had to cut rations for life-saving assistance to about six million Syrians, said Bettina Leuscher, the WFP’s Chief Spokesperson on September 21 in a panel discussion in New York.

Besides, many Syrian refugees cannot access basic albeit expensive medical care like in Lebanon where the health system is highly privatized. Some have even resorted to returning to Syria to get treatment.

“A lot of families have lost their assets, and, therefore, do not have any extra resources to spend on health,” explained Dr. Henia Dakkak, Programme Adviser at the United Nations Population Fund (UNFPA).

She said that lack of financial resources prevent families from accessing private health care, such as contraceptives or emergency obstetric care.

“No matter what system you put in place, if people cannot afford to come, then it is a waste of time,” said Dr. Babatunde Osotimehin, Executive Director of UNFPA in the meeting in New York.

225 women will give birth every day in Iraq

After declaring the highest level of humanitarian emergency in Iraq in August 2014, the United Nations reported that approximately 225 women will give birth every day in the country.

UNFPA also reported that about 1,000 pregnant women will face potentially fatal complications each month. The number of unassisted childbirths is likely to rise.

These women need urgent health care but facilities are overstretched. This is worrisome as Iraq has the second highest fertility rate in the Arab world. Weak reproductive health services as well as shortages in health supplies and manpower are a recipe for disaster.

Over a million Iraqis have been forced to escape the country’s north and west after the Islamic State declared a caliphate in these areas in the summer of 2014.

This jihadist group has terrorized masses and spread panic among the international community. It has beheaded journalists and aid workers and massacred members of religious minorities like the Yazidis.

In Erbil, in the north of Iraq, one maternity hospital reported that its medical needs doubled since June 2014. The city has welcomed many displaced Iraqis from Mosul and other close cities.

UNFPA forecasted that it needs US$6.5 million to offer reproductive health care services to pregnant women and girls as a result of the crisis.

Despite the fact Hamas and Israel agreed on a long-term truce in late August, 45,000 pregnant women in the Gaza strip still lack medical assistance. Access to healthcare is restricted for Gazans due to Israel’s blockade.

The United Nations Office for the Coordination of Humanitarian Affairs said that the conflict has increased the number of child deaths, miscarriages and premature births. Stress, in particular, has led to obstetric complications.

Additionally, there is a shortage of medical supplies due to the high number of casualties – more than 2,000 deaths including three-quarters of civilians – as well as the destruction of facilities.

The United Nations reported “heavy shelling” over almost half of Gaza’s hospitals, which are now “severely damaged” the night of July 25 only.

During the conflict, it was dangerous for pregnant women to go to the hospital to deliver or seek help because of Israeli bombings. It was also risky to deliver at home without a nurse’s help because these families live in precarious conditions.

Even before the hostilities begun in July 2014, one fifth of pregnant women in Gaza could not get the medical care they needed to give birth or access health facilities because it is complicated to go through Israeli checkpoints. Some women have even delivered on the road.

One in three marriages among Syrian refugees involves a minor

The United Nations Children’s Fund revealed that about one third of Syrian refugees’ marriages involved a person under 18. This finding highlights the threat of child marriage in conflict zones.

In refugee camps in Jordan, parents resort to marrying their young daughters when they struggle to make ends meet. Early marriages are also a means for refugees to cope with hardship.

Other parents said that children’ marriages protect their daughters from sexual harassment. In war zones, young women, in particular, are the target of sexual violence and exploitation, according to UNFPA.

Refugee women in Lebanon said that they could not live the way they wanted out of the fear of being sexually harassed.

“Madison square garden [in New York] holds 17,000 people,” said Carolyn Miles, President and Chief Executive Officer of Save the Children in a meeting on September 21 in New York.

Well, “17,000 children will die today of preventive deaths” before their fifth birthday, she pointed out.

Notwithstanding that the rate of child mortality was halved since the 1990s and reached 6.3 million last year, 17,000 dead children every day “is still far too many,” acknowledged Ms. Miles. ”We have a huge amount of work.”

The proliferation of humanitarian crises today has hampered these advances. Wars and forced human displacements in the Middle East and Africa in particular have limited women’s access to basic healthcare services – which is key to stability, development and saving lives.