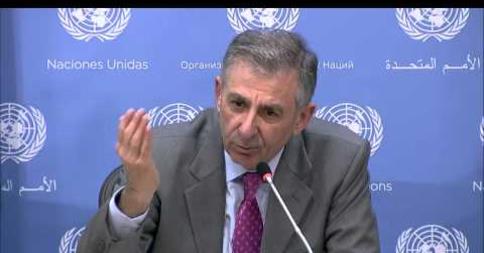 Morocco’s unique approach to defusing terrorism and countering incitement to terrorist acts within the context of Islam was highlighted this week at the United Nations during a high-level meeting of the UN Security Council’s Counter-Terrorism Committee (CTC).

Some officials from the North African country, including Minister of religious affairs, Ahmed Toufik, made the trip to New York to explain how Morocco addresses the plight of terrorism which breeds on ignorance, poverty and other social fractures and how it tries to pacify radical elements whenever they are identified.

The Moroccan officials pointed out that Morocco, which is convinced that no sustainable security, peace, and stability are possible without security, an inclusive and equitable human development and the promotion of authentic cultural and religious values, adopted a multidimensional approach that does not focus on the security aspect only but also on the religious and spiritual aspects and on socio-economic issues.

Being aware that preventive measures are as important as the coercive ones and that only the combination of these three elements, along with political reforms, will allow an effective fight against violent radicalism and terrorism, Morocco bases its strategy on security measures upgrading, the promotion of an Islam that commends the values of tolerance, grounding all religious teachings within the ethics of moderation, and on efforts to ensure a socio-economic development to all layers of society.

In a message to the event, the UN Secretary-General Ban Ki-moon also stressed that struggle against terrorism must be multifaceted and that “the international community must act swiftly and concretely to confront the root causes of violent extremism.”

“Our action has to be multifaceted: addressing the immediate security challenges, the political context and underlying, long-term grievances,” he said in the message that was delivered by Under-Secretary-General for Political Affairs Jeffrey Feltman.

“There is no more time to lose. We have to act concertedly and with determination,” Ban ki-moon said.

In their presentations before the CTC, Moroccan officials renewed their country’s commitment to cooperate with the international community, whether at the bilateral or multilateral level, in the fight against terrorism under all its forms.

They pointed out in this regard that the efforts made by security services to thwart any domestic terrorist threat do not hamper the country’s contribution to anti-terrorism struggle at the international scale, mainly through intelligence sharing that proved crucial in foiling several terror plots against friendly countries.

A special emphasis was laid on Morocco’s cooperation with African States that enabled to nip in the bud many terrorist plans targeting African senior officials or Western interests in African countries.

Since 2005, Moroccan authorities have managed to dismantle several terrorist groups headed by Sahel-based members of Al Qaeda in the Islamic Maghreb (AQIM). These include “Fath Al Andalous” (2008), “Al Mourabitoune al Joudoud “(2009), and “Amgala” (2011).

Several UN officials have lauded Morocco’s experience in anti-terrorism struggle, its cooperation with African countries and its good practices in teaching religion and moderate Islam and in training African preachers and imams.

“The Moroccans teach their religious leaders moderation which constitutes, according to them, the authenticity of Islam,” Mr. Laborde pointed out, adding that is why the Moroccan strategy to teach the solid foundations of an authentic religion is extremely important.

“It’s really important to show the world that this is a good practice. And we are ready to disseminate this good practice all over the world.”

Jeffrey Feltman on his part welcomed Morocco’s efforts in fighting extremism and lauded Morocco’s king initiative to train African Imams as timely.
This initiative falls in line with the international community’s efforts to address the growing threat of violent extremism worldwide, he said