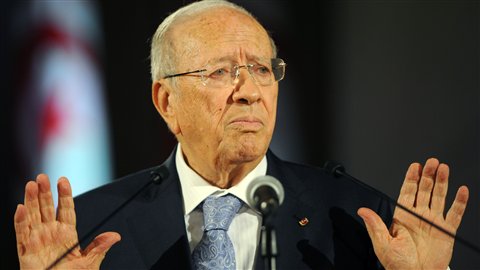 With the presidential election drawing nearer by the day in Tunisia, the house of the Nidaa Tounes party is in shambles after its nominated presidential candidate, Beji Caid Essebsi, alleged that some members of his party want him dead. His allegation has led to the opening of an open inquiry by the prosecution service.

Mr. Essebsi’s claims could come as a surprise to many but his age has been a subject of a heated debate within the party for several weeks. Some think that at 87 years, he should not be competing for the country’s highest post. Essebi also served as a Prime Minister during Ben Ali’s regime, forcing many to raise their eyebrows.

Although Essebsi is considered as the main rival of the Islamist party Ennahda, the differences within his party’s camp could affect his popularity. Ennahda won the last elections held in the country.

During the weekend, Omar Shabou a member of the Nidaa Touness party was on television when he questioned Essebsi’s capability to execute the duties of a president. He said he has seen Essebsi’s medical file and his health would not allow him to perform the duties of president. His remarks led to his dismissal from the party together with another member.

Prosecution service spokesman Allala Rhouma said that after Essebsi’s statements during a last week Friday meeting, an inquiry has begun “and the judge will summon Mr Essebsi so that he can name those implicated.” Those implicated in the allegations could be charged of attempted murder and conspiracy if they are found guilty, the spokesman added.

Essebsi stated that the “infiltrators” of the party who are opposed to his nomination are the ones that want him eliminated before the November 23rd presidential elections.

North Africa Post's news desk is composed of journalists and editors, who are constantly working to provide new and accurate stories to NAP readers.
NEWER POSTEgypt attacks EU for false charges and dualism
OLDER POSTA New Moroccan Party is Born, Will it Redesign the Political Landscape?