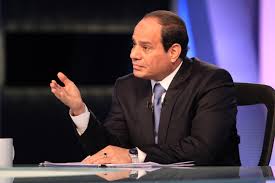 President El-Sisi welcomed, on separate occasions, Palestinian President Mahmoud Abbas and Saudi Arabia’s Foreign Minister Prince Saud Al-Faisal to discuss issues within the Middle East and North Africa. Abbas is reported to have complained about Israel’s latest actions to the Egyptian president. The Saudis on their behalf were much more interested in the dangers posed by the fighters of the Islamic state.

Egypt’s presidential spokesman Ehab Badawi said that during the meeting between El-Sisi and Abbas, the latter lamented that Tel Aviv’s decision to construct new settlements on the occupied territories in the West Bank will be a hurdle in the negotiations for a peace deal between Israel and Palestine. El-Sisi assured Palestine of the significance of the Palestinian cause in his policies.

In another meeting with Saudi’s Foreign Minister Prince Saud Al-Faisal which included Egypt’s Intelligence chief Mohamed El-Tohami, President El-Sisi discussed with them matters relating to maintaining security and stability within the region especially in Iraq, Syria, Libya and the threats posed by the Islamic State.

Cairo stressed on the importance of maintaining security in Libya while ruling out any foreign intervention. Egypt has lately been accused of collaborating with the United Arab Emirates to launch airstrikes in the Libyan capital but it has denied such allegations.

With regards to the Islamic State, the parties discussed means of stopping the group from expanding beyond the large swathes of land it controls in Iraq and Syria before neutralizing the threat it poses. Spokesman Badawi added that El-Sisi underlined the importance of a joint Arab action against terrorism.

North Africa Post's news desk is composed of journalists and editors, who are constantly working to provide new and accurate stories to NAP readers.
NEWER POSTBrazil’s President No Longer a Shoo-In After the Recession
OLDER POSTPalestine: More than 100,000 homeless