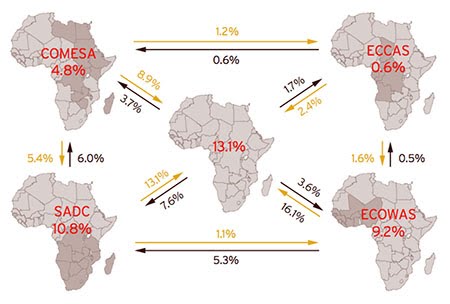 Trade exchange between Malawi and other countries in the African region has improved over the years, with statistics showing that Malawi now accounts for 32% of intra-Africa trade
A recent study published by Brookings Institution Africa Growth Initiative indicates that at 32%, Malawi ranks on position seven out of 13 countries that have improved performance, with Eswatini, formerly Swaziland, claiming 85% share of intra-Africa trade. This means that opportunities for Malawians to generate revenues through trade have improved over time, countering a previous narrative and data that the country’s intra-Africa trade is low.
The study, titled ‘Significance of Intra-Africa Trade: Getting the Narrative Right’, which analyses development and progress towards intra-Africa trade, demonstrates that trade between African countries has generally risen and provided a greater economic significance than previously thought. “Currently, sets of African countries, particularly the smaller, landlocked and more open economies like Malawi have significantly higher levels of dependence on intra-continental trade [imports plus exports] than others thus improving intra-Africa trade,” the study says. The African average of intra-regional trade is, however, dragged down by the continent’s larger economies, especially Egypt, Nigeria and to a lesser extent South Africa who claim the highest share of intra-Africa trade.
The report also underscores the importance of the African Continental Free Trade Agreement (AfCFTA) as a key driver of intra-Africa trade growth. Malawi’s economy is agro-based, with agricultural products accounting for about 80% of all exports, a development that has disadvantaged the country in terms of trade with its peers. Therefore, the country in southeastern Africa needs to diversify its export products and local production to build on the momentum in growing its trade in the process of generating foreign exchange, according Betchani Tchereni, an economist from Malawi University of Business and Applied Sciences. “The trade treaties and policies in place should compel us to trade more with our regional peers and think of diversifying our product portfolio.”