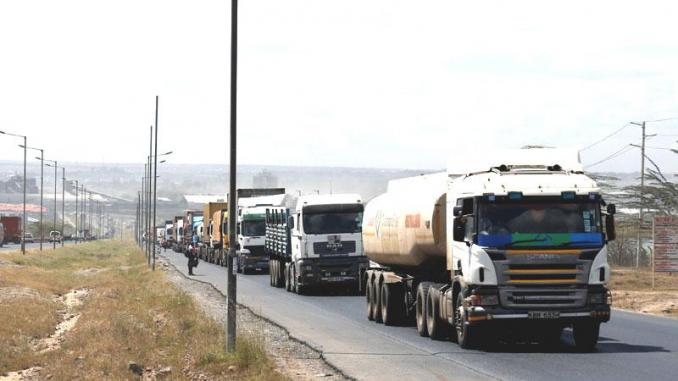 Hundreds of truckers have stopped working on Cameroon’s border with Chad to protest a ban on heavy trucking into Chad, which depends on Cameroon for 80% of its imported goods.
Drivers transporting food and humanitarian assistance slammed what they call Cameroon’s refusal to repair the highly dilapidated road linking northern Cameroon and Chad. The strategically important route is part of the lone highway used by truck drivers to transport goods from Cameroon’s Douala seaport to N’djamena, capital of landlocked Chad. “The situation is very, very complicated [bad],” said Ahmad Yussuf, President of the Cameroon, Chad Truck Transporters Union, adding that several hundreds of trucks are grounded in Cameroon and Chad to honor the protest called by their transport union. Yussuf also explained that perishable food items and medical supplies that have to be stored at particular temperatures are exposed to heavy rainfall and a harsh climate. Though their business has come to a complete halt, he says it is a price they have to pay to force the government to repair the road.
But the drivers also are protesting Cameroon government’s ban issued last month on heavy-duty truck use in the area north of the border with Chad. Cameroon officials say the lone road linking the two countries has deteriorated greatly, causing accidents and further damage to the road when used by heavy duty trucks. Cameroon is instructing heavy duty truck drivers to unload and use lighter vehicles to transport the goods from Cameroon to N’djamena. But the drivers say unloading and transporting goods in smaller trucks is expensive and time consuming. In May, the World Bank reportedly approved a US$538 million loan to improve road and rail infrastructure along the Douala N’djamena road linking Cameroon, Chad and Nigeria within the next three years. After the May 2014 attack and kidnapping of Chinese road construction engineers, Cameroon’s military engineering corps took over part of the construction. Additionally, Cameroon state officials now are blaming ongoing heavy rains and flooding for damaging the road and causing accidents.