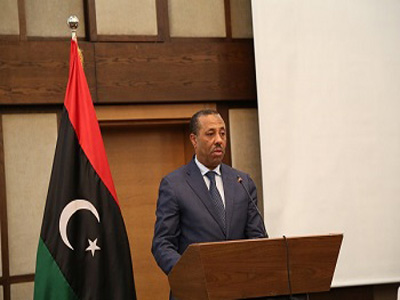 While Libyan authorities have admitted that they lost control over capital city Tripoli to an alliance of militias led by Misrata-based forces, the recently elected Libyan parliament reappointed Abdullah Al-Thinni as the new Prime Minister and tasked him with forming a “crisis government.” Meanwhile, the groups controlling Tripoli, which mostly support the previous Parliament, the General National Congress (GNC), appointed pro-Islamist figure Omar Al Hassi to form a “salvation government.”

These groups, including elements with strong Islamist leanings, refuse to recognize the recently elected House of Representatives, deeming it liberal and federalist. They took control of “most ministries, institutions and state bodies in the capital Tripoli” as admitted by Libyan authorities in a statement.

The militias have taken over these institutions and are stopping the staff from entering some of the government buildings under their control.

The House of Representatives that holds its sessions in Tobruk is hoping that the reappointment of Abdullah Al-Thinni will mark the beginning of the end of violence in Tripoli.

According to Parliamentary spokesman Faraj Hashem a “crisis government” should be formed within a fortnight.

The 64 out of 106 MPs who voted for Thinni rely on the security experience of this career soldier and former defense minister to take up the challenge of reasserting government control over a country where many fear a descent into full-scale civil war is unavoidable.

Government forces in Libya are ill equipped and untrained to fight armed militias.

North Africa Post's news desk is composed of journalists and editors, who are constantly working to provide new and accurate stories to NAP readers.
NEWER POSTIslamic law and human rights: do they mix? (part I)
OLDER POSTAlgerian diplomats kidnapped in Mali freed