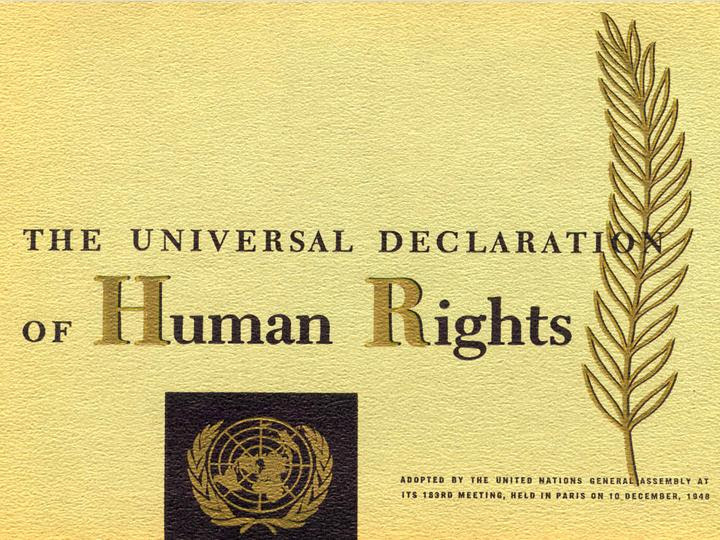 Islamic law and human rights: do they mix? (part I)

There is an ideological dichotomy between international human rights law and Islamic law, which may explain the numerous human rights abuses in the Muslim world.

On August 19, the faculty of law of Buenos Aires University presented the first international code of human rights published by Thomson Reuters. It gathers all the rights, declarations and principles of all the treaties on human rights.

“All the nations of the world celebrate [this code] in their parliaments while adapting it to their cultural and political peculiarities,” explains Daniel Herrendorf, the author of the code and advisor on human rights at the United Nations.

In fact, international codes of human rights may not be applicable or relevant to Islamic countries because international law originated in the practices of Western states. It was developed in a Western-dominated system with which several Islamic groups across North Africa and the Middle East clash today.

Western concept of law
The notion of human rights was born in London with the 1688 Bill of Rights. It was further developed in the United States with the 1776 Virginia Declaration of Right and in Paris with the 1789 Declaration of the Rights of Man and the Citizen.

The United Nations’ Universal Declaration of Human Rights, which was adopted in 1948, “is, precisely, universal: it has the same value for each and every one of the 192 countries that make up the UN since its creation […], with the active participation of the five continents of the world,” adds Mr. Herrendorf.

In fact, the most powerful states, namely Western countries, “write their interests into the law.” As such, international law is not based on universal principles of behavior.

It reflects Western states’ perception of morally acceptable behaviors. Since World War I, an American-oriented conception of international law has emerged, emphasizing human rights, humanitarianism and faith in reason. Democracy has become the preferred social structure.

In light of this, “international” standards of human rights might not be relevant or applicable to Islamic states as the Muslim world has been excluded from the development of a global jurisprudence.

International law is, by definition, a flexible process. It results from historical developments whereas the Sharia (i.e. Islamic law) is rooted in a specific historical context and does not follow the development of human history. It is based on the Sunna (i.e. Islamic rules) and the Quran.

Also, Islamic countries have a different conception of justice. In other words, Islam does not deal with individual rights like in the West. The Quran refers to Muslims as part of the Ummah (i.e. community of believers).

Besides, from a Western perspective, the advance of human rights is the result of political battles, like the French Revolution in 1789 or World War II. In Islam, human rights do not take place in the same secular setting. It deals with duties toward God.

The concept of “freedom” in Islam is different from the modern concept of individual freedom, a legacy of European Enlightenment promoted in the Charter of the United Nations.

In fact, Muslim scholars did not know for some time the legal meaning as well as the political and philosophical concept of freedom. Freedom was known only as the contrary of slavery.

Another key difference is that Muslims are denied political authority unlike their Western counterparts. Article 21 of the Universal Declaration of Human Rights states that “[t]he will of the people shall be the basis of the authority of government”.

This notion of political authority directly conflicts with the Islamic principle of political justice. In Muslim countries, authority resides with the people but did not originate with them. God defines political power.

In Islam, the individual is not the main actor in the development of domestic and international laws. The Muslim man or woman exists only as a part of the broader Islamic community. For instance, the Islamic veil or the burqa – which cloaks the entire body – hides a woman’s identity behind her function: she is a daughter, a wife and a mother.

Disagreements over international human rights law
The historical context in which the Sharia was developed in 622 A.D. explains – although it does not legitimize – Muslim states’ conservative position on human rights.

Pre-Islamic societies in Arabia, in the early seventh century A.D., lived in the age of ignorance (“Jahiliyyah” in Arabic). Immorality and sexual debauchery abounded.

Notwithstanding indications in Islamic texts that women held high positions in society, gender discrimination was widespread. Arabs practiced female infanticide and polygamy, for example. Women could seldom choose their husband, divorce freely or inherit from their family.

In light of this, Muslim countries have contended that the Universal Declaration of Human Rights fails to take into account the cultural and historical context of Islamic states. They say that Muslims cannot implement the declaration without transgressing Islamic law.

For instance, gender equality contradicts the Islamic view of the role and status of women. The Cairo Declaration of Human Rights in Islam, adopted in 1990 by the member states of the Organization of the Islamic Conference, offers the Muslim perspective on human rights. It states that “all men are equal” – rather than “all men and women”.

The Quran sets out that Muslim women have full legal capacity in relation to civil and commercial matters. Yet, they do not enjoy equal rights when it comes to their relationship with men. For example, a Muslim man may marry a Christian or a Jewish woman but a Muslim woman cannot get married to a non-Muslim man.

A Muslim man may marry up to four wives at the same time but a Muslim woman can only get married to one at the time. A Muslim man may divorce his wife or wives by unilateral repudiation (“talaq” in Arabic) without justifying his action.

A Muslim woman can divorce only if she gets her husband’s consent or by judicial decree if her husband is unable or unwilling to provide for her. In addition, a Muslim woman inherits twice less than the share of a Muslim man.

The Egyptian Supreme Constitutional Court is a case in point. As it ensures that any new legislation respects Islamic law, it makes it very difficult for women to divorce.

In accordance with the Sharia, Article 18 of Law No.25 (1929) states that a repudiated woman has to observe a waiting period (“idda” in Arabic) not exceeding one year, during which she is not allowed to marry another man. If the wife initiates the divorce in fault-based divorce proceedings, she would have to provide evidence of harm, often through eyewitness testimony.

The above references and principles of Islamic law highlight the ideological dichotomy between international human rights law and Islamic law, which may explain the numerous human rights abuses in the Muslim world.