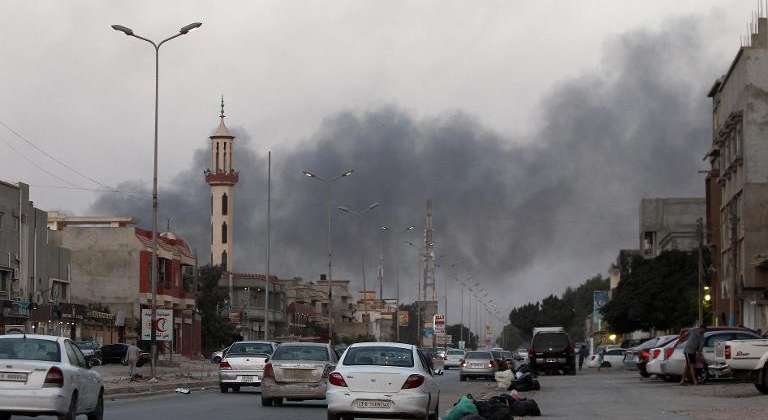 Libya : UAE and Egypt behind unidentified Libyan airstrike, US officials

Despite Egypt and the United Arab Emirates (UAE) refuting allegations that they are involved in the airstrikes by unidentified warplanes, U.S officials have stated that the two countries were behind the attacks. Libya suffered two separate air strikes in the past couple of days. Their targets were the Islamists. Cairo has always warned that it will intervene in Libya when it feels that its stability is threatened.

U.S officials were quoted by The Times claiming that Egypt and the UAE collaborated to carry out the attack. Egypt provided launching bases while the UAE sent in the warplanes, aerial refueling planes and pilots for the attack. However, State Department spokeswoman Jen Psaki declined to comment on the airstrikes but warned that “Libya’s challenges are political and violence will not resolve them.”

Tripoli has not reacted to the reports but its Ambassador to the UN, Ibrahim Dabbashi, denied the involvement of the two countries as he doubts their potential to carry out such an attack. “I don’t believe it” he said before adding that “they (Egypt and the UAE) are not even technically capable, and it would also be a very sensitive thing for them politically.”

Rebel forces from Misrata had already blamed the air strikes on Egypt and the United Arab Emirates, both of which have cracked down on Islamists.

Meanwhile in Cairo, Egypt’s foreign Minister Sameh Shoukri sounded as if they have not interfered in Libya at the ongoing meeting with his counterparts from the states bordering Libya to discuss the situation in the latter. Shoukri stressed that the escalating violence in Libya “affects the sovereignty of neighboring countries and threatens their stability” which “could lead to forms of intervention in Libyan affairs, which should be avoided.”