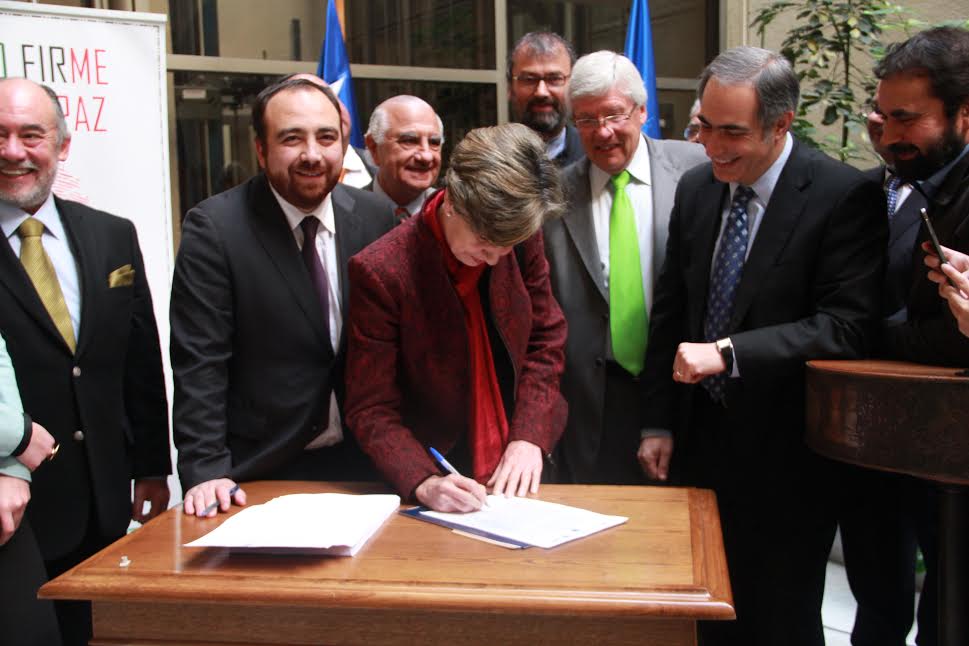 Chile’s President of the Senate signs on August 13 the “one million signatures for peace” petition opposing Chile’s purchase of arms from Israel at the national congress in Valparaiso (photo: K.Lahrichi)

Chilean policy-makers and civil society leaders met on Wednesday in the national congress in the legislative capital Valparaiso to oppose Chile’s purchase of arms from Israel.

In the crowded hall “The Thinkers”, Chilean parliamentarians, including the Senate’s president and the Chamber of Deputies’ vice president, launched a “one million signatures for peace” campaign. It aims to be “an effective way of pressure that will enable Chile to be consistent with its respect and protection of human rights,” says the press release.

At the time of the signing, more than 1,900 Palestinians, mostly civilians, died and roughly 10,000 were injured, according to the United Nations, since the beginning of the conflict between Israel and Hamas in the Gaza Strip on July 8. Sixty-four Israeli soldiers and three civilians were killed.

Despite its pro-Palestinian stance, Santiago has sustained its military trade with Israel.

“There is no transparency in the government but we believe that Chile purchases 70% to 80% of its armament from Israel,” says Janna Sakalha, Secretary of the National Council of Palestine in Chile before the signing of the document.

Due to defense and national security matters, it is not possible to verify the amount.

“We respect the government of Chile […] and we do not intervene in these matters. What is important for us is the awareness of the Chilean people that the Palestinian people have been suffering for decades,” says Mr. Imad Nabil Jadaa, Ambassador of Palestine in Chile.

In his office on the eleventh floor of the Senate building in Valparaiso, Senator Ivan Moreira puts his colorful glasses in a traditional Middle Eastern pencil holder where the word “Palestine” is carved. A framed picture of former Palestinian leader Yasser Arafat with himself hangs on the wall behind his desk.

Senator Moreira is the Vice President of Chile’s right-wing Independent Democratic Union party and the Senator of the Lagos region in the south of the country. He has been nicknamed with affection “Abu Moreira” for his support for the Palestinian cause.

“There is a contradiction here. Chile’s commercial relation with Israel dates back for some time, especially since Chile’s military government,” he says.

Israel, now ranked as one of the world’s largest arms exporters, sold weaponry to the military juntas and right-wing contras that repressed popular uprisings in Latin America in the 1970s and 1980s, according to Benjamin Beit-Hallahmi’s book “The Israeli Connection: Who Israel Arms and Why”.

Senator Moreira has asked the Chilean government to provide information about current “negotiations [on arms trade] with a country that is killing a lot of innocent people”. “Chile has a moral obligation to Palestine,” he says.

Yet, producers Yoav Roeh and Aurit Zamir show in their 2013 investigative documentary “The Lab” how governments that have publicly lambasted Israel for its military action in the Gaza Strip and the West Bank have nevertheless sent their officials for military training in the Jewish state.

The Israeli arms industry has indeed become marketable and highly profitable thanks to military operations in the Palestinian territories, according to the documentary. Foreign clients want to buy weapons tested on the ground.

Arabs of the Andes

About 8,000 miles away from the Holy Land, Chile’s Palestinian community is the largest one outside the Middle East. They are between 370,000 and 380,000 in a country of 17 million people, according to Senator Moreira.

Chile continues to take refugees from the Palestinian diaspora, which Israel refuses to grant a right to return.

Relations between Jews – estimated to be about 25,000 in Chile – and Palestinians are healthy. “At the social level, there are commercial exchanges [between the two] and marriages,” says Anuar Majluf, Executive Director of the Palestinian Federation of Chile, a non-governmental organization promoting Palestinian rights and culture.

Although some are fighting against assimilation to the Chilean society to preserve their culture and language, “it is up to the Palestinians to decide whether or not they want to return to Palestine. What matters is the right to return,” he says.

Around 95% of Palestinians in Chile are Christians, says Mr. Majluf, a fourth generation Palestinian. They come mainly from Bethlehem, Jerusalem, Beit Sahour, Beit Jala and Tayibe in the West Bank.

Notwithstanding Hamas’ Islamic posture in the Gaza Strip, “we have to differentiate the political reality and the context. Obviously, I do not want the creation of an Islamic state in Palestine. I favor the establishment of a laic state with respect of the rights of all citizens disregarding their religion,” says Mr. Majluf.

“Nonetheless, Hamas is a relevant and respectable political actor in Gaza. It was born as a movement of resistance against the occupation of Israel,” he adds.

In 2011, the government of the center-right president Sebastián Piñera recognized Palestine as a sovereign state.

“Until the 1990s, the topic of the Palestinians in Chile was tackled as an ideological topic by the left. Only leftist politicians could defend the Palestinian cause. Since President [Patricio] Aylwin, the first president of Chile after the military government, a large campaign was launched, and the right started to defend Palestine as a humanitarian cause,” explains Senator Moreira.

Last Saturday, about 25,000 protesters marched in Santiago towards the Palacio La Moneda, the President’s seat, to “repudiate Israel’s action in Palestine and especially the recent genocide in Gaza,” says Mr. Majluf.

In July, Santiago suspended its Free Trade Agreement negotiations with Tel Aviv. The country’s foreign ministry “strongly condemn[ed] the Israeli attacks in the Gaza Strip”. A statement pointed out that “the reprehensible kidnappings and deaths of three young Israelis and one young Palestinian cannot serve as an excuse to initiate terrorist actions nor to attack areas densely populated by civilians.”

At the beginning of the month, some Chileans symbolically closed Israel’s embassy in Santiago. Each protestor held a sign with one of the letter of the word “CLAUSURADO” (meaning “closed” in Spanish) in front of the building.

Despite the stance of Chilean policy-makers and civic organizations, “the solution of the problem [between Israel and the Palestinians] has to come from international organisms. They need to launch campaigns like boycotts, divestment and sanctions [a 2005 civil society campaign to boycott Israel until it complies with international law and recognize Palestinians’ rights], says Mr. Majluf, who is also a lawyer specialized in civil and family law in Chile.

He refers to theoretical physicist and author Stephen Hawking’s decision to decline an invitation as an honored speaker at a conference hosted by former Israeli president Shimon Peres in 2013. Mr. Majluf also mentions the case of PGGM, a major Netherland-based pension fund manager that divested from five Israeli banks over their dealings with Jewish settlements in 2014.

“We cannot see Israel as a normal state when it behaves the way it does,” contends Mr. Majluf.

“I think that what is happening in the Gaza Strip is dangerous. I do not think that it is a genocide, but I think it is a massacre,” said Brazilian President Dilma Rousseff.

In addition, Venezuela plans to take in temporarily several hundred Palestinian orphans in need of medical care. The United Nations High Commissioner for Refugees and UNICEF will supervise the children’s transfer.

Israel expressed “deep disappointment” in response. The Foreign Ministry’s spokesman declared that such moves “constitute encouragement for Hamas, a group recognized as a terror organization by many countries around the world.”

Meanwhile, on the other side of the Atlantic Ocean, Ambassador Jadaa pauses as he takes a long draw on his cigarette.

“Today is the moment to look how far justice goes.”