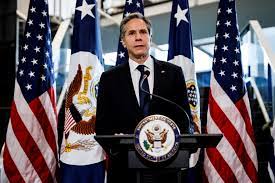 The head of US diplomacy will travel in August to South Africa, the Democratic Republic of Congo and Rwanda, the State Department announced, as the US seeks to counter Russian diplomatic influence.

Antony Blinken will aim to show “African countries that they have a critical geostrategic role and are crucial allies on the most pressing issues of our time, from promoting an open and stable international system to addressing the effects of climate change, food insecurity and global pandemics,” the State Department said in a statement.

The US ambassador to the UN, Linda Thomas-Greenfield, will visit Ghana and Uganda next month, while the head of the US development agency, Samantha Power, recently completed a trip to Kenya, a long-time US ally, and Somalia.

The diplomatic efforts come as Russian Foreign Minister Sergei Lavrov embarked on his own tour of Africa where he blamed Western sanctions for soaring food prices, a claim rejected by Washington.

This will be Blinken’s second trip to sub-Saharan Africa since taking office. Last year he visited Kenya, Nigeria and Senegal.

Prior to the Ukraine-Russia conflict, US diplomacy in Africa focused mainly on competition with China, which has made significant infrastructure investments on the African continent and, unlike the US, has done so without requiring any quid pro quo from states on democracy or human rights.