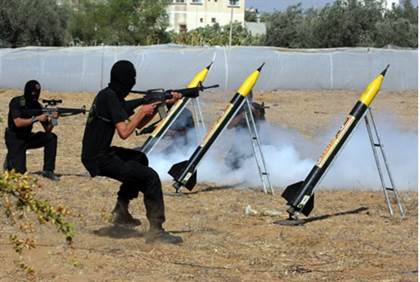 A report published on Sunday by Al-Resalah, a Hamas website, claiming that Israeli officials are bypassing the Egyptians to directly negotiate with Hamas for a ceasefire agreement lasting 5-10years has been refuted by an Israeli official although an official statement is yet to be released. The report stated that Hamas is unpleased with Egypt’s handling of the negotiations while Israel has realized that Cairo is “pursuing its own particular interests more than Israel’s.”
The Al-Resalah report claimed to be based on “knowledgeable sources” did underline that direct negotiations between Hamas and Israel are being held simultaneously with the ongoing Cairo ceasefire talks. It added that the direct negotiations are “realizing better progress” because they are beyond the media’s coverage.
Israel has always stressed that it doesn’t negotiate directly with terrorist groups and it considers Hamas as one. However, the two sides have come to a number of deals in past years, including a 2012 ceasefire after Operation Pillar of Defense and a 2011 deal to swap captured Israeli soldier Gilad Shalit for over 1,000 Palestinian prisoners. Egypt has more often been the negotiator between the two parties.
Hamas Qatar-based leader Husam Badran said that Hamas’s leaders had been approached numerous times in the past to negotiate with Israel, but always refused. He lambasted Israel on Twitter claiming that they are “playing at negotiations in order to fool the world that there is a peace process.” “We know how to run our political game and how to run it militarily,” he boasted. He hinted that the moment for “useful negotiations with the occupiers” has not arrived yet.
Hamas political leader Khaled Mashaal warned that they are willing and prepared to engage “in the military campaign and the diplomatic campaign at the same time.”