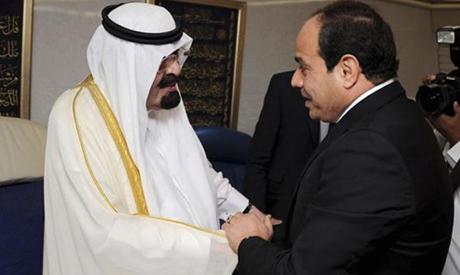 President Abdel Fattah El-Sissi will be meeting King Abdullah of Saudi Arabia for the second time since he became the Egyptian Head of State but it will be the first time he sets foot in Saudi Arabia. The meeting is expected to be fundamental. Egyptian diplomats disclosed that the visit which is part of the Saudi-Egyptian summit talks to be held in Jeddah will be centered on the fight against terrorism, the Palestinian cause and its challenges, prospects of holding a conference of Egypt’s friends, the crises in Iraq, Libya and Syria; and the means of reinforcing their bilateral cooperation in divers sectors.
The Saudi-Egyptian summit and the visit of President El-Sissi are described as a strong signification of the ties between the two states by Former Egyptian Prime Minister Hazem Al-Beblawi. He said “it reflects the Kingdom’s important position in the minds of Egyptian people.” Saudi Arabia has been supportive to El-Sissi and his government since the ousting of Mohammed Morsi of the Muslim Brotherhood from power.
Abdullah Al-Qabbae, professor of political science at King Saud University in Riyadh, added that the first visit of El-Sissi as President to the kingdom showcases “the Egyptian leadership’s appreciation of the Kingdom’s wise stances and policies.” An analyst, Zuhair Al-Harthi, thinks that the meeting could also give “a new push for joint Arab action” among Arab countries.
The meeting could also lead to the concretization of a joint Arab military force to combat the militants of the Islamic State in Iraq and the Levant (ISIL). Former Egyptian Foreign Minister, Mohammed Al-Orabi, said it can “happen during the coming period.” El-Sissi has already warned that the “ISIL poses a real threat and not an illusory threat as some people believe.”