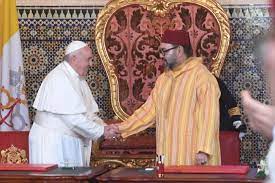 In Morocco, King Mohammed VI is custodian of the freedom of worship in a country that embraces the Muslim and Jewish constituents of its identity.

Thanks to efforts spearheaded personally by the Monarch, Morocco has strengthened its character as a home of religious diversity and traditions of tolerance and coexistence.

In 2010, King Mohammed VI initiated a program to repair hundreds of ancient synagogues and cemeteries scattered throughout Morocco. Since then, the kingdom has spent millions of dollars to repair nearly 200 of these sites. In 2011, Judaism became enshrined in the country’s new constitution as a key part of Moroccan identity.

Taking example of tolerance at home, the King spared no effort to champion the values of inter-faith dialogue and coexistence in international forums.

Morocco’s distinctiveness is underpinned by the Commandership of the Faithful and the Maliki rite, an institution that aims to shield the Moroccan society against the demons of ideological manipulation and subversive forces, using, to this end, enlightened religious training based on moderation and tolerance.

“In Morocco, there is no difference between a Muslim and a Jewish citizen,” said the King in a message to an inter-faith conference held in Morocco in 2018.

“As Commander of the Faithful, I cannot speak of the Land of Islam, as if only Muslims lived there. I am keen to ensure freedom to practice the religions of the Book and I am the guarantor of that freedom. I protect Moroccan Jews as well as Christians from other countries, who are living in Morocco,” the King said in a speech at the esplanade of Hassan Mosque in Rabat on the first day of the Pope’s visit in 2019.

Domestically, Morocco has engaged, since 2005, in the reform of the religious sphere with the aim to counter radical religious narratives, while preserving the Moroccan version of Islam.

This reform helped to modernize religious institutions such as the Council of Religious Scholars and the Ministry of Religious Affairs, ensuring greater transparency when it comes to the financing of mosques and other religious activities.

Building on its moderate school of Islam as a bulwark against extremism conducive to pre-empting radicalism at home and abroad, Morocco has extended the project of the Mohammed VI Institute, created in 2015, for the training of Imams to respond to the growing demand from a number of countries.

The Institute has offered training, accommodation and stipends to hundreds of Imams who are now practicing in their homelands spreading the lofty values of the religion.