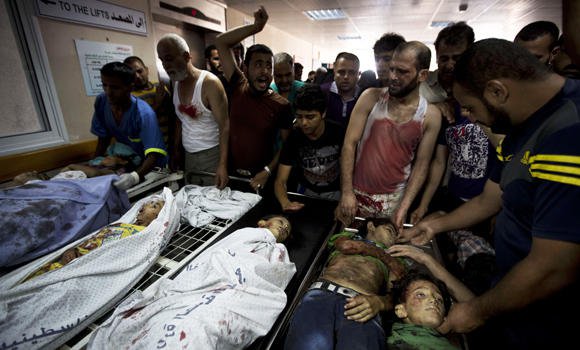 Israel is winning the war in Gaza as Western and Arab media succumb to its latest weapon: the perceived truth

When Tony Blair was photographed recently with the new Egyptian president Mr Sisi, many of us in the press gallery wondered if we were witnessing a new dawn of Arabic leaders embracing bold new media skills.

You might have pondered in recent days how it is that the whole world seems to accept Israel’s bombardment of civilians – children included – with little rebuke. How is it that the West and even Arab leaders accept the tenuous argument that Israel has the right to habitually slaughter civilians in the name of “defending” their country against Hamas rocket attacks – when the whole premise of those same attacks (the blockade) is conveniently ignored?

And for that matter, what about the new softly spoken manner of Israel’s spokespersons who seem expert on deflecting direct questions about the moral justification of bombing children in schools while sympathizing with Palestinian parents who have to bury their children

Israeli government spokesmen such as Mark Regev appear slicker than their predecessors, who were often visibly indifferent to how many Palestinians were killed. Even Bejamin Netanyahu last weekend, when doing a number of live interviews on US networks, was more polished than ever.

It’s all about a new battle being fought and won by Israel in an area where Arab countries are lagging behind: media training. Or, if you like, the management of perceived truth over actual truth.

The smoother and more effective media spots by both Netanyahu and his spin doctors are based on a confidential study on how to influence the media and public opinion in America and Europe. Written by the expert Republican pollster and political strategist Dr Frank Luntz, the paper was commissioned five years ago by a group called The Israel Project, with offices in the US and Israel, for use by those “who are on the front lines of fighting the media war for Israel”.

The book is responsible for quite a lot as, if you can steer media away from attributing blame for an atrocity, then therefore this makes the act in the first place more tempting to carry out. But what came first? The chicken or the egg? Did Israel bomb UN schools, then merely relies on its slick media handlers to deal with the PR fall out? Or was it pushed to commit the heinous act knowing it could deal with the hacks later?

Israeli spokesmen are now denying their responsibility for the most notorious and televised atrocities such as the strike on the UN hospital last week. This is an old PR tactic, as old as British MI6 spies being trained in how to deal with KGB interrogators when caught: ‘Deny everything, admit nothing, but keep the other side talking for as long as possible to establish what they know about you’.

It’s a little outdated and not one policy endorsed by Dr Luntz, which is sometime referred to as “first you say no story, then you say old story”. In other words, deny everything in the teeth of the evidence on day one and, by the time definitive proof of the massacre comes through, the impact of your admission to the responsibility is limited when you finally admit you are culpable.

The Luntz report, officially entitled “The Israel project’s 2009 Global Language Dictionary, was leaked almost immediately to Newsweek Online, but its true importance can be acknowledged now.

What particularly jumps out of the 112 page tome is the gulf between what Israeli officials and politicians really believe, and what they say.

“Don’t confuse messages with facts,” Dr Luntz advises the spokesmen as he explains how facts should be selected and best presented to make Israel’s case.

It is a sophisticated document based on wide-ranging opinion polls, suggesting, for instance, that the removal of Israeli settlements from the West Bank should be denounced as “a kind of ethnic cleansing”. Dr Luntz stresses that spokesmen must demonize Hamas, but above all emphasize that they feel for the sufferings of Palestinians as well as Israelis.

The booklet is full of comprehensive and exhaustive advice about how they should shape their answers for different audiences, which would make Tony Blair blush. For example, the study says that “Americans agree that Israel ‘has a right to defensible borders’. But it does you no good to define exactly what those borders should be. Avoid talking about borders in terms of pre- or post-1967, because it only serves to remind Americans of Israel’s military history. Particularly on the left this does you harm. For instance, support for Israel’s right to defensible borders drops from a heady 89 per cent to under 60 per cent when you talk about it in terms of 1967.”

So how should spokesmen deal with what the booklet admits is a tough question? They should call it a “demand”, on the grounds that Americans don’t like people who make demands. “Then say ‘Palestinians aren’t content with their own state. Now they’re demanding territory inside Israel’.” Other suggestions for an effective Israeli response include saying that the right of return might become part of a final settlement “at some point in the future”.

Dr Luntz cites as an example of an “effective Israeli sound bite” one which reads: “I particularly want to reach out to Palestinian mothers who have lost their children. No parent should have to bury their child.”

The study admits that the Israeli government does not really want a two-state solution, but says this should be masked because 78 per cent of Americans do. Hopes for the economic betterment of Palestinians should be emphasized but Dr Luntz doesn’t explain how to go about that when the Israeli blockade ensures that the Gaza strip remains so desperately poor.
@MartinRJay

North Africa Post's news desk is composed of journalists and editors, who are constantly working to provide new and accurate stories to NAP readers.
NEWER POSTHope For The Best: Argentines Wake Up In Default
OLDER POSTMorocco Deplores Closure of Moroccan-Algerian Borders as Inconsistent with logic of history, legitimacy