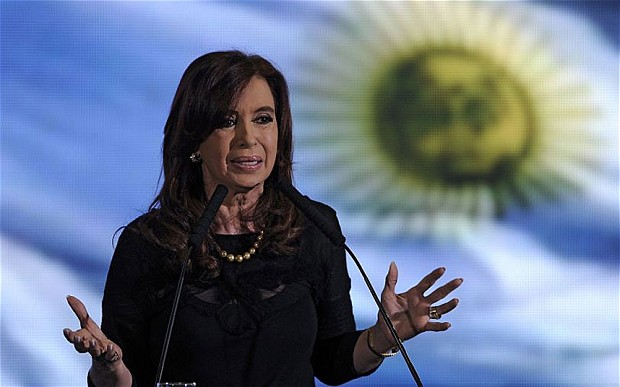 Hope For The Best: Argentines Wake Up In Default

The mood is defiant in the streets of Buenos Aires after Fitch Ratings and Moody’s Investors Service declared today Argentina in default on some bonds for the eighth time in its history.

“I believe that this is an unfair situation and Argentina needs time to pay its debt with interests,” says Julia, with a dash of despair, a florist working a few blocks away from the president’s ”pink house”.

The New York Court of Appeals condemned Argentina to repay 100% of its debt late Wednesday.

Argentina was keen to pay a part of its debt – US$539 million – to its “hold-out” bondholders on June 30th but U.S. judge, Thomas Griesa, blocked the move. He ruled that Argentina could not pay the restructured bonds unless it also paid more than US$1.5 billion to two hedge funds, Aurelius Capital Management LP and Elliott Management Corp.’s NML Capital Ltd.

These were coined “vulture funds” because a chunk of their profits comes from buying the debt of distressed countries or companies.

NML Capital, for instance, is expected to get US$800 million for Argentina’s debt securities that cost him $US50 million.

How it all begun

In 2001, Argentina experienced an economic crisis, causing riots, looting and political instability. The country then stopped payment of more than US$100 billion in debt – the world’s largest sovereign default. It equals to about 166% of its GDP.

A few years later, following negotiations, creditors granted Argentina a refund of 30% to 50% of the nominal value of the country’s debt. In other words, it is as if Argentina was allowed to pay just US$300,000 out of the US$1 million it initially had to pay to creditors.

More specifically, Argentina was back on its feet in 2005 and made a debt-restructuring proposal to its creditors to normalize relations. It offered holders of old debt the possibility to abandon their non-performing claims in exchange for new bonds – less onerous but where interest would be paid. Roughly 75% of them participated in the debt exchange.

In 2010, when the legislature voted to reopen the exchange temporarily, most of the remaining bondholders tendered their bonds. It brought participation in the swap up to 93%.

However, a small group of holdout creditors refused the restructuring. They demanded repayment in full in the U.S. federal court in New York.

Argentina contends it cannot pay these creditors due to the Rights Upon Future Offers (RUFO) clause contained in the restructured bonds. It prevents a securities holder from being favored over another.

Thus, if the South America nation pays US$1.5billion to the two hedge funds, other hedge funds may require the same treatment.

Some estimates put the total amount Argentina would have to pay in excess of US$200 billion, which would throw the country into another crisis.

In default and in denial?

“The United States manipulated the legal system. It is in the United States’ interest that Argentina does not pay its debt so that it accumulates,” says Nahoel, a newspapers vendor on the commercial Florida street in Buenos Aires.

In fact, disputes about bonds have to be settled in U.S. courts, as it was on July 30th, because the bonds Argentina sold to finance its government in the 1990s were in U.S. dollars and issued under New York state law. At that time, the country had a huge deficit following a period of hyperinflation.

Notwithstanding, a large section of the Argentine society shares Nahoel’s qualms. They are against the United States, capitalism and neo-liberalism.

President Cristina Fernandez de Kirchner, a pugnacious center-leftist, has persuaded them playing the ideology card. She claims Argentina is the victim of a conspiracy, which is why she played down the impact of the default.

“It’s July 31 and the world keeps spinning and this doesn’t stop being very good news,” she said in a televised address. “Tomorrow August begins and life continues, just as it has all these years we’ve been living in Argentina.”

Axel Kicillof, the economy minister, also attacked the objectivity of international credit-ratings agencies in a press conference. He called Judge Griesa an “agent” of the New York hedge funds.

Speaking to the nation in a televised news conference, Kicillof denied point blank that his country defaulted on its debt – an “atomic nonsense”. “Those who today cheer the apocalypse, applauded the 2001 [crisis],” he added.

On the other hand, many Argentines believe that the government has failed to fulfill its duties. They say that Argentina’s turbulent history is attributable to state mismanagement and fluctuating commodities prices.

“It is a government that is only interested in remaining in power rather than tackling pressing issues,” he argues.

The reality is that the peso fell down more than 4% against the dollar on Thursday.

Although Buenos Aires has been locked out of international capital markets since 2001 and therefore is less affected by the consequences of the default, it will certainly have a negative economic impact.

Latin America’s third economy suffers from soaring inflation, slowing growth, falling wages and the devaluation of the peso at the beginning of the year.

“The main effect of the default is that Argentina’s economy will grow less so the state will need to issue more pesos to finance its fiscal deficit. This will boost inflation and devaluation, with a drop in employment and the economic activity,” says Sebastian Auguste, Director of the MBA Program at Torcuato Di Tella University in Buenos Aires.

“Argentina will not be able to take advantage of international conditions of cheap credit or make the necessary investment to growth its GDP,” he explains.

In particular, durable goods and employment will be most affected if the default persists, explains Dante Sica, Director of abeceb.com, a consultancy in Buenos Aires.

Downward pressures, increase of high levels of interest rate and lower economic expectations will be the first effects of the default, according to Sica.

Manufacturers of durable goods like cars, motorbikes and domestic appliances will be the most affected, thereby creating a toll on families’ expenses.

Nevertheless, Judge Griesa, who made the ruling that led to the South American state’s default, ordered negotiations with holdout investors to continue. Hope remains that Argentina will pay its debt after the RUFO clause expires in December 31st.

North Africa Post's news desk is composed of journalists and editors, who are constantly working to provide new and accurate stories to NAP readers.
NEWER POSTEgypt plans more than $100m “major” wheat investment plans
OLDER POSTIsrael is winning the war in Gaza as Western and Arab media succumb to its latest weapon: the perceived truth