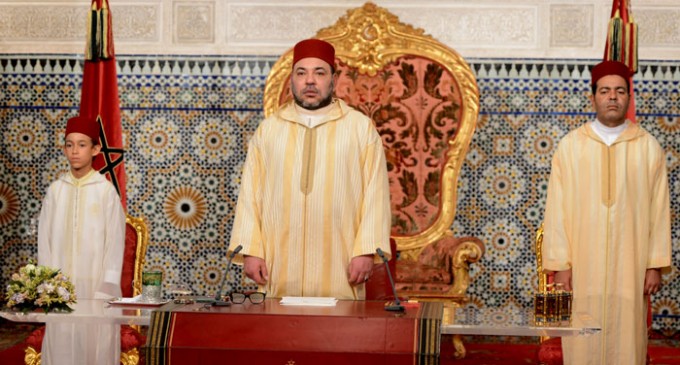 Morocco Deplores Closure of Moroccan-Algerian Borders as Inconsistent with logic of history, legitimacy

Morocco has once again deplored the closure of borders between the Kingdom and Algeria, describing the closure as inconsistent with the logic of history and legitimacy and as a hindrance to the evolution of the Maghreb Union.

This came in the speech delivered on July 30 by the King of Morocco Mohammed VI on the occasion of Throne Day, marking this year the 15th anniversary of his enthronement.

Alluding to the difference between Morocco and Algeria over the Western Sahara issue, he said “I personally believe that disputes are not inevitable and that they are quite normal in all communities. Inside the European Union, for example, there have been disagreements between EU members, but the breaking point is hardly ever reached.”

“What is regrettable in the Maghreb, however, is that a dispute is allowed to continue for the purpose of disrupting the evolution of the Maghreb Union,” he deplored “Whatever the magnitude of the dispute, it should not, for instance, be used as a pretext for the continued closure of the borders (between Morocco and Algeria,) he said.

The two countries’ land borders have been closed since 1994 at Algeria’s initiative, costing the two economies billions of dollars.

Recalling that “for more than six years now, Morocco has been calling for a solution to this odd situation, King Mohammed VI deplored that “the response to all Morocco’s constructive initiatives has been a stubborn, systematic refusal which is not only inconsistent with the logic of history and legitimacy, but also out of step with our peoples’ natural entitlement to human interaction and economic exchange.”

In this respect, he hailed as “positive” the outcome of the visit he paid to Tunisia last June and expressed confidence that “Tunisia will forge ahead along a peaceful path, consolidate the institution-based state and achieve development and prosperity for the Tunisian people.”

King Mohammed VI has repeatedly pleaded, as he did during his trip to Tunis, for the advent of a new Maghreb order and for the construction of a strong Maghreb so that the region plays its political, economic, social and security role and so that Maghreb countries make the most of their vast potential.

However, the diplomatic tussle between Rabat and Algiers over the Western Sahara whose independence is claimed by the Algeria-backed separatist Polisario front is hindering the construction of the Maghreb Union to which all the people of the region aspire.

In his speech of the Throne, King Mohammed reiterated that his country’s territorial integrity remains “our foremost priority,” that the Sahara issue “is the cause of all Moroccans” and that “this is a sacred responsibility for all of us.”

Calling for greater vigilance and for total mobilization, the king recommended that “the necessary measures be taken to remain one step ahead of our opponents’ schemes.” “Indeed, there is no room for wait-and-see attitudes, reliance on others or reactive behavior,” he insisted before reaffirming commitment to the autonomy initiative for Morocco’s southern provinces, an initiative described by the UN Security Council as “serious and credible”.

In this respect, the King pledged to carry on the development and modernization projects in these provinces, particularly through the implementation of the development model for the southern provinces. “This model is based on a participatory approach, on good governance and on cohesive, multidimensional programs aimed at achieving integrated development,” he recalled.

The Morocco-proposed initiative proposes to grant Western Sahara a large autonomy under Moroccan sovereignty. The proposal was welcomed by the UN and by world powers as a sound basis to negotiate a final settlement of the regional conflict.

North Africa Post's news desk is composed of journalists and editors, who are constantly working to provide new and accurate stories to NAP readers.
NEWER POSTIsrael is winning the war in Gaza as Western and Arab media succumb to its latest weapon: the perceived truth
OLDER POSTLibya : Benghazi now an “Islamic emirate” under Ansar al-Sharia