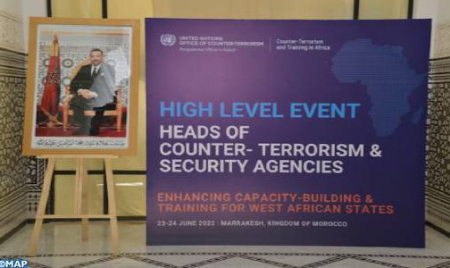 Marrakech is hosting a two-day high-level meeting of the heads of counterterrorism and security agencies of North African and Sahel countries.

The meeting, held under the auspices of the United Nations Office of Counterterrorism, provides participants with a platform to debate strategies and approaches to strengthen regional cooperation on counter-terrorism issues, terrorist threat assessment, and capacity building needs for long-term resilience.

The two-day high-level meeting, themed “Capacity Building and Training for West African States”, is attended by representatives of 23 countries from the region, who will discuss and exchange views on their assessment of the threat in the Sahel region and its extension to the Gulf of Guinea.

Last May, the Kingdom hosted the ministerial meeting of the global coalition to defeat ISIS and had then warned that separatism and terrorism are two sides of the same coin as fighters especially in Africa swap from one side to another.
“The collusion against the sovereignty and stability of states, and the convergence of financial, tactical and operational means, create an objective alliance between terrorist and separatist groups,” Morocco’s Foreign Minister Nasser Bourita had said, adding that this has been confirmed by the increasing number of individuals crossing from separatist to terrorist groups and vice-versa.
Bourita had made it clear that those who back separatists are actually contributing to the spread of terrorism.
“Those who finance, shelter, support and weaponize separatism, are actually contributing to the expansion of terrorism and undermine regional peace and security.”