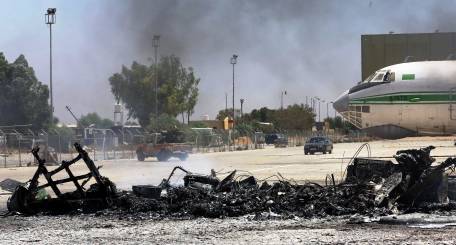 Tripoli international airport has become the center of interest of different rebel groups in Libya. The airport is controlled by the rebels from Zintan but the Islamists and fighters from Misrata want to take it over from them. The Zintan rebels are being accused of backing the liberalists in the Libyan parliament.

The clashes have been going on for more than a week and have made more than 50 casualties and left 120 people injured. The transactions in the airport have come to a halt since last week and several airplanes have been destroyed by the shelling.

Al Jilani Al Dahesh, a security official at the Tripoli airport said the clashes which have resumed on Sunday after discussion for a ceasefire failed was “the most intense bombardment so far.” The airport however continues to be under the control of the Zintan rebels despite the “mortar rounds, rockets and tank fire” that were fired. The fighting has spilled onto the streets of the capital. Some of the airport’s infrastructure has been damaged.

Islamist militias are persistent with their ambition to force the Zintan rebels out and they are being supported by other armed groups, including the powerful Misrata Brigades, which played a key role in the 2011 UN-backed revolt that toppled and killed strongman Muammar Gadhafi.

The European Union has released a statement urging “all parties to exercise restraint, to abide by international law and to respect civilians” and hopes that they will work towards finding “a peaceful resolution through dialogue and compromise” because “there is no military solution to the crisis.” He concluded that “the only option is a political solution and a peaceful democratic process.”

Libyan authorities and the military are ill equipped to confront the rebels.