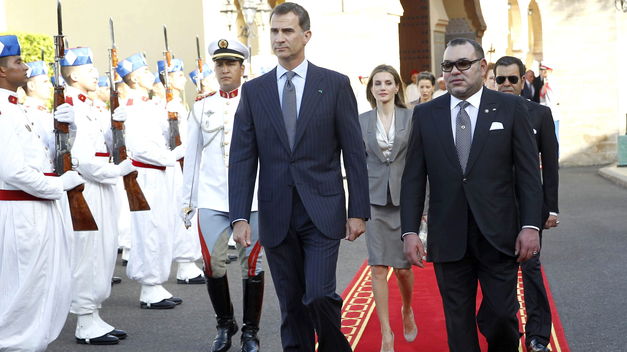 Spanish King’s Visit to Morocco, a Token of a Strategic Relationship

The two-day official visit King Felip VI of Spain is paying to Morocco as of this Monday, less than a month after his enthronement following the abdication of his father, translates the special importance the two countries grant to their strategic relationship and shows that the changeover of power in Spain is not having any adverse impact on this relationship.
On the contrary, the Spanish King’s visit to Morocco, his first outside Europe –his two earlier trips having taken him to the Vatican and Portugal- perpetuates a tradition established long ago by Spanish officials who always head to Morocco for their first trips abroad, and reflects the shared resolve of the two countries to consolidate their neighborliness bonds and to give a new momentum to their strategic bilateral relations.
By paying the two-day visit to Morocco at the invitation of King Mohammed VI, King Felipe VI highlights the significance of the two countries’ relations at the political, economic, human and geopolitical scales, and also the strength of the relationship existing between the two countries’ royal families since the enthronement of King Felip’s father, Juan carlos in 1975.
Ever since, the two royal families, which grew aware that their relationship can play a key role in building up confidence between the two countries and in strengthening their multi-faceted relations, have endeavored to consolidate their relations and to shield them from any contingency political or diplomatic crisis between the two governments. It happened in the past, when relations were in turmoil because of disagreement on fisheries, agriculture or illegal immigration issues that governments looked to the Kings to defuse the tension.
In this vein, some Spanish media, including “ABC” paper, commented on King Felip’s visit to the North African country, describing the brotherly ties binding the Spanish and Moroccan Royal Families as “most solid pillars” of the two countries’ relations. These ties contribute greatly to developing bilateral relations and also help resolve the misunderstandings which surface from time to time between the two capitals, said the papers.
King Felip’s visit is thus reflecting the strong and friendly ties existing between the two royal families and is part of continuous and permanent contacts between the two countries which are both aware that they are strategically important for each other and which are both eager to upgrade their relations and partnership, based on mutual respect, confidence, and a win-win cooperation in a regional context marked by geostrategic changes.
The royal visit is also providing an opportunity for the two countries to discuss at the highest level ways and means of consolidating a future-oriented strategic partnership and of giving a new momentum to their ever growing economic relations, with Spain standing now as Morocco’s second largest economic and trading partner after France. Spain even beat France in 2013 and ranked as Morocco’s first supplier.
The high level talks will also cover the challenges thrown at the two shores of the Mediterranean in view of terrorism, illegal immigration, drug and human trafficking, and cross-border crime which constitute a serious threat to the whole region.