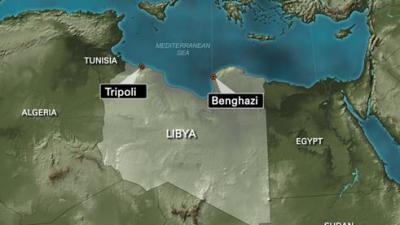 Members of Libya’s General National Congress have voted to move the new parliament from the capital to Benghazi. The government has allocated millions of dollars to the project. The city of Benghazi located in the eastern part of the country is famous for being the focal point of the uprising against Gadhafi but it has also continued to be one of the most violent regions since the end of the war.
There was a low turnout at the parliament during the vote. Critics have questioned the decision because the government has little control over Benghazi. Rebel forces, fighters loyal to General Khalifa and Islamists have been battling between themselves for control over Benghazi.
Justice Minister Saleh al-Merghani said “there is nothing to stop us having the legislative authority in this city” despite the ongoing violence and the little authority the government has there. Almost $21 million has been allocated by the government for the project. Amal Bayu, a member of the parliament, is counting on “the people of Benghazi” to “protect the assembly like they protected the National Transitional Council during the revolution.”
The plan to move the newly elected national assembly from the capital Tripoli to the country’s second largest city is part of efforts to rebuild state authority in the underdeveloped east claimed to be neglected by Libyan governments for decades.
The feasibility of the parliament’s transfer has raised eyebrows among diplomats and some lawmakers. There is no government building in Benghazi to host the parliamentarians. Minister Saleh al-Merghani said the parliamentarians will be lodged in Tibesti hotel, which will also serve as the seat of the assembly. The hotel has struggled to attract travelers since the ousting of veteran Libyan leader Muammar Gaddafi in 2011 in an armed uprising.