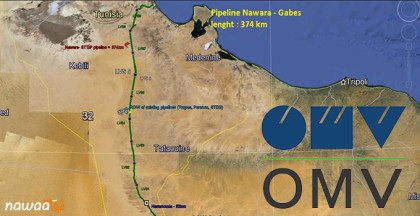 Tunisian state owned oil and gas exploration and production company, Entreprise Tunisienne d’Activités Pétrolières (ETAP), will be benefitting from a $75 million corporate loan from the African Development Bank. The loan was approved by the Bank’s board of directors last month. The fund will be directed to the funding of the Nawara project as part of the South Tunisian Gas Project (STGP).
The loan is a 7 year loan with non-sovereign guarantee. Upon the completion of the Nawara project, the state is expected to reduce its gas importation and increase its hydrocarbon exports. Tunisia generates more than 90% of its energy from gas-fired power generation and more than 50% of the gas used is imported.
The Nawara project is being equally financed respectively by ETAP and OMV Tunisia GmbH, the Tunisian subsidiary of the OMV Austria, the largest listed industrial company in Austria and the leading energy Group in Central and Southeastern Europe.
Nawara should become the center of the country’s gas infrastructure network and serve as the base for the development of hydrocarbon resources for future energy sufficiency. Tunisia has already reached its production limits although demands have continued rising. There is an energy deficit and the Nawara project is seen as the answer.
Tunisia will be the major shareholder of the project that will help it to re-strengthen its macroeconomic resilience and add value to its natural resources. Foreign direct investment, the creation of jobs and contribution to the prosperity of small and middle sized enterprises are also benefits of the project.
The project will comprise of a Central Processing Facility that will compress the gas while a Gas Treatment Plant in the Coastal Ghannouch industrial area will produce marketable products such as natural gas, propane and butane.