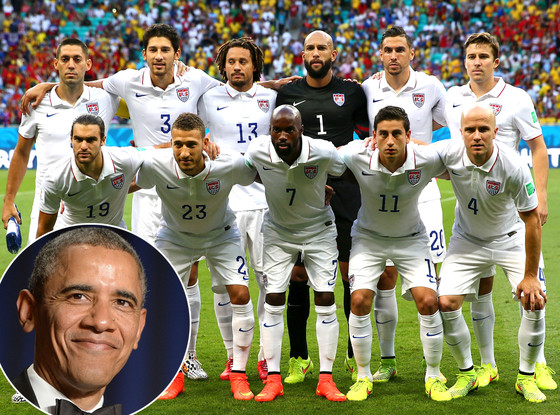 The 70% rule, not American exceptionalism leads to US’s ‘best soccer ever played’ 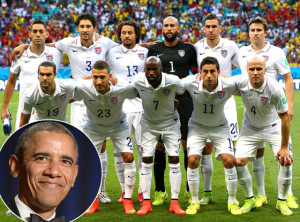 Two of the World Cup’s Round of 16 teams received the homecoming reserved for champions, even though they exited with the final week of the tournament remaining be played. Algeria’s Desert Foxes and Team USA shook the international soccer landscape with their unexpected performances before leaving, though.
American team leader Tim Howard tweeted: “We’re playing the best soccer…that this team has ever played.”
Previously he wrote: “Big night. We answered the bell.”
Let’s look at why the Americans ascended to this level, starting with words from the Supporter-in-Chief, Pres. Barack Obama.
“You can make it here in America if you’re willing to try.”
And, “I believe we can build on the progress …”
The ideas behind these two snippets, pieced together from Mr. Obama’s 2012 re-election victory speech, bounce around in the heads of many Americans – regardless the topic. Work and build. Act.
An inspired American, if he sets out to knock down an obstacle and acquire something, he gets really close.
An Italian businessman, the co-owner of the website footynews24.com, told me he notices the same attitude in working with Americans. Paraphrasing his thoughts, he said an American might accept a job for which he had 70% of the qualifications. That worker, according to Matteo Galeotti, would not linger over what he did not know. That worker would deploy his 70% skills and meet the objectives of the position.
It’s sweat equity. Put your back into it. To understand this, visualize the adroit, workman-like play of retired tennis champion Pete Sampras. No flash, just trophées.
Lacking the know-how, a hard-working American might invent a new or more effective way of getting the job done.
That brings us back to the monumental World Cup effort. The US forced Belgium into a 0-0 deadlocked score after the first 90 minutes. Goalkeeper Howard repelled 16 shots on goal. Only in the 105-th minute did Belgium’s Red Devils reach the net and eventually win 2-1 in extra time.
About Coach Klinsmann
The get-er-done attitude even extends to coach Jurgen Klinsmann, 49, a former international player and 1990 World Cup champ with Germany. He landed with the US team in 2011 with a solid pro record, also. In 17 years in Europe’s top leagues, he scored 226 goals.
But, his sideline appearance in 2014 did not mimic that of other slick designer suit-wearing, European-born coaches. Outfitted in a blue, logo-laden golf shirt, he resembled maybe an engineer or IT specialist within an American company. A man there to do the job and celebrate with a cold beverage at the end.
Again, a workman-like image. He has already agreed to clock in for the next run at the World Cup title in 2018.
It’s likely 35-year-old Howard signed off of national duty with this tweet:
“Thanks for the memories Brazil!! ‪#WorldCup2014 ‪#OneNationOneTeam.”