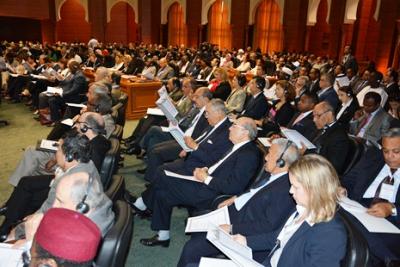 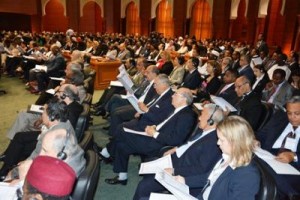 Morocco has highlighted the key role south-south cooperation can play in promoting stability and progress in Africa and pointed that the continent’s natural resources and human potential can create an “African miracle.”
This came in a message that Morocco’s King Mohammed VI sent to the 25th annual meeting of the Crans Montana Forum, held in Rabat June 19-22 under the theme “Heading to the South-South: not only a strategy, but a necessity.”
‘South-south cooperation should not remain a mere empty slogan, but become a tangible reality,” said the king in his message, adding that this cooperation, which is a key implement in achieving stability and progress in the continent “is a must which has to be addressed through a holistic, participatory and integrated approach that can help achieve effective results.”
Morocco’s King who voiced his confidence that Africa, thanks to its combined natural resources and human potential, can create “an African miracle,” said “this miracle is not just a dream, nor an aspiration, but a tangible reality that our peoples can achieve, if artificial disputes are resolved and if there is a political will to join efforts in order to build a stable and unified Africa.”
This is not the first time that the King of Morocco calls for bolstering south-south cooperation and expresses his confidence in the continent’s potential. During the numerous African tours he conducted, the latest having taken place last February, the King has repeatedly urged African nations to take their continent’s destiny in their own hands, boost inter-African cooperation, rebuild Africans’ trust in their own potentials, and unleash the continent’s intellectual and material abilities in order to overcome underdevelopment, poverty and exclusion.
In his message to the Crans Montana Forum, King Mohammed VI again insisted that “if African countries want to stay the course and achieve economic and human development, they should build self-confidence and self-reliance.”
He also underlined that “security and stability in the continent depend, first and foremost, on respect for the sovereignty and territorial integrity of states,” and require as well coordination in the fight against terrorist organizations and against arms, drugs and human trafficking gangs, which constitute “a threat not only for regional security, in the Sahara and Sahel area, but for the whole Euro-Mediterranean zone, and even worldwide.”
The message also called for enhancing “triangular cooperation as an innovative mechanism for optimal use of available resources, both between regional economic groupings in the South, and within the framework of balanced and mutually beneficial partnerships with the North,” and voiced the North African country’s willingness to share with other African States its experience and know-how and to build on the confidence and credibility it enjoys with both its partners and international institutions, part of this triangular cooperation.
The Crans Montana Forum was established in 1989 as a global platform meant to promote international cooperation, dialogue, growth, stability, peace and security in the world.