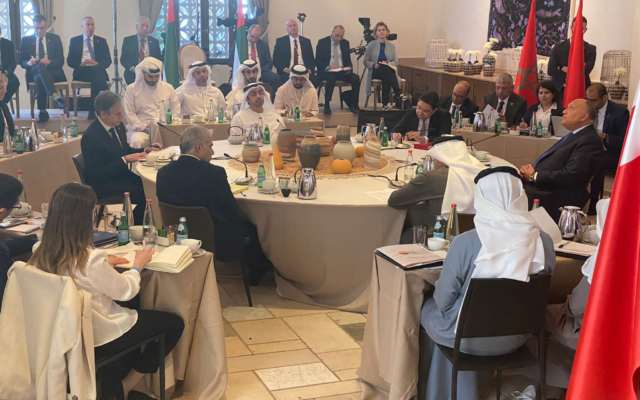 Negev Summit: Morocco calls for building up a new dynamic for peace to open up promising prospects for Middle East 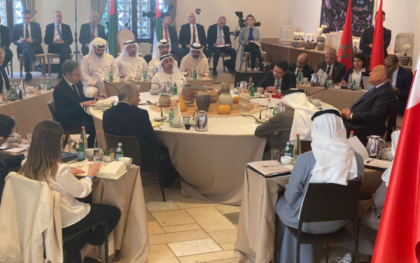 Moroccan Foreign Minister Nasser Bourita has stressed the need to build up a new dynamic for peace in the Middle East and to take concrete measures likely to open up promising prospects for the peoples of the whole region.

“We must build a dynamic based on concrete steps that the people can feel, a dynamic that can contribute to improving the life of the world and to opening up promising prospects for the youth and the peoples of our region”, said Bourita during a joint press conference held at the end of the diplomatic summit which brought together Monday in the Negev, in southern Israel, the Foreign Ministers of the United States, Israel, Morocco, Bahrain, Egypt and the United Arab Emirates.

“We are here in the Negev to be a force working for peace and to say that a solution to the Palestinian issue and the Arab-Israeli conflict is possible,” he pointed out, recalling that King Mohammed VI has always supported the solution of two States, living side by side and the establishment of a Palestinian State based on the 1967 borders with Al-Quds East as its capital. He added that any possible solution must also respect Israeli security interests.

The minister also expressed consideration and gratitude for the role played by Washington in supporting the Middle East peace process, stressing that “the United States has always been a reliable partner on which we can count in building peace.”

The Moroccan minister noted that the Negev summit brought many positive messages to the inhabitants of the region, but also clear and firm messages for those who work directly or through proxies. “We are here to defend our values and our interests and protect this dynamic.”

Like almost all the participating foreign ministers, Bourita condemned the terror attack which targeted, on Sunday, the city of Hadera, south of Haifa.

“I think our presence here today is the best response to such attacks,” said the Moroccan Foreign Minister.

Touching on the resumption of relations between Morocco and Israel, he said Morocco’s decision “is not an opportunistic move,” emphasizing the depth of the ties between the two nations as well as the historical involvement of the Kingdom in the peace process.
“Regional dynamism is very important, as is regional stability in order to strengthen peace between Israel and Palestine, and Morocco has played a pioneering role in the Middle East peace process, and today it is also ready to help give new impetus to this dynamic”, he pointed out.

He noted the large community of Israelis who had immigrated from Morocco, and added he’d just found out that the two mayors of Negev towns Yeruham and Dimona were of Moroccan origin.

Regarding the prospects for Moroccan-Israeli relations, Bourita said that much progress had been made since the signing of the tripartite declaration in Rabat, recalling the numerous exchanges of visits by both sides, the launch of air routes as well as the organization of meetings.

In this regard, he said that these relations will soon experience an important dynamic which will further contribute to strengthening these relations in various fields, particularly in the diplomatic aspect.

“We are here today because we truly believe in peace, not the peace in which we ignore each other, but the peace based on the construction of common values and interests and peace that keeps us away from war,” he pointed out.

The top diplomats participating in the summit that was described as historic announced that the conference would be the first iteration of a permanent regional forum, as they reaffirmed the importance of growing ties between Israel and the broader Middle East, reported the times of Israel.

The unprecedented gathering was widely seen as an attempt by Israel and its Arab allies to create a front against shared regional foe Iran. Israeli officials told reporters on the scene that the talks centered around creating a “regional security architecture,” among other issues.

At the joint press conference following the meetings, Foreign Minister Yair Lapid told reporters that the Negev Summit would become “a permanent forum.”

He said the confab was building “a new regional architecture based on progress, technology, religious tolerance, security and intelligence cooperation.

“This new architecture, the shared capabilities we are building, intimidates and deters our common enemies – first and foremost Iran and its proxies,” he was quoted by the Israeli paper as saying.