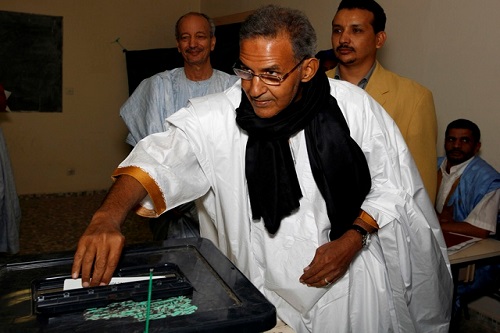 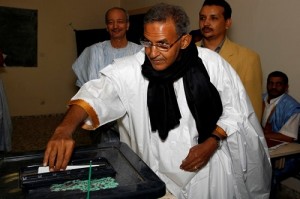 Presidential elections in Mauritania are slated for June 21 but majority of the opposition parties, amongst them are the main parties, have decided to boycott it because the results can already been determined. Only four candidates will be challenging President Mohamed Ould Abdel Aziz for the seat. The opposition coalition, National Forum for Democracy and Unity (FNDU), said it will only participate when it is convinced of the elections credibility.
The opposition parties that are boycotting the elections claim that participating in the “masquerade” activity will only affect their credibility towards their supporters.
One of the presidential candidates, Lalla Mariam Mint Moulaye Idriss, admitted that total transparency can’t be achieved in elections. She downplayed the importance of political parties, their ideologies and programs in Mauritania because “the role of the tribal chiefs and the political and social reality of this country transcend” all of the above.
Jemli Mansour, president of the strong opposition Islamic Party, Tawassoul said the opposition demands “free, transparent and consensual elections to allow for a peaceful change at the top.”
Lalla Mariam Mint Moulaye Idriss said following the footsteps of FNDU could lead to a “breakdown even more serious than the one witnessed in Mauritania in 2008, and that is not what the country needs.” She is the only female candidate vying for the post.
Other candidates participating in the elections also have similar feelings regarding the credibility and the transparency of the elections. Candidate Ibrahima Moctar Sarr said the election is an opportunity to criticize the state-backed system of racism, feudalism and slavery.
Some Mauritanians have also decided to align themselves with the FNDU by not voting during the election because they already know the winner.